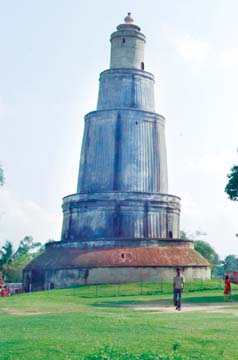 Chhota Pandua Minar is the most important minar of all existing buildings of Chhota Pandua in the Hughli district of West Bengal. Built both as a madhana and a tower symbolising victory and glory, it stands at the southeast side of the bari mosque (1477 AD) at a distance of 52.50 m. It is round in design and consists of five storeys, each decreasing in diameter from 18 m at the base to 4.50m at the top. Its total height is 37.50m. Inside there is a spiral staircase leading to the top. The staircase opens out to a terrace, which runs all round the base of each successive storey. The entrance is on the west side towards the mosque. The walls of the minar are plastered and are decorated in the three lower storeys with round flutings. Originally enameled tiles were used in the inside walls of the tower.

The minar, because of its size and shape, has often been compared with the Qutb Minar of Delhi. But there is a difference between the two: whereas the various storeys of the Qutb Minar form a continuous tapering outline from its bottom to the top, the storeys of the present minar give a broken outline of the structure in receding shafts. The only other earlier example of its class in Indo-Muslim architecture appears to be the Chaubara of Bidar (1422-36 AD) which consists of a base and a receding storey. The fact that the plastering of the minar is in contradistinction to the sultanate style suggests Tughlaqian influence. [ABM Husain]