Chhota Sona Mosque sometimes described as a 'gem of Sultanate architecture' is situated about 3 kilometres' south of kotwali darwaza and half a kilometre to the southeast of the tahkhana complex in the Firuzpur Quarters of gaur-lakhnauti, the capital of Sultanate Bengal. It occupies the western end of the southern bank of a large tank. A little to the west of the mosque is a modern two-storied Guest House, built several years ago by the Department of Archaeology and Museums, Government of Bangladesh. In between the Guest House and the mosque there runs north-south a modern road, which appears to have been of earlier origins, connecting the main city of Gaur-Lakhnauti with its suburb to the south through the Kotwali Darwaza. 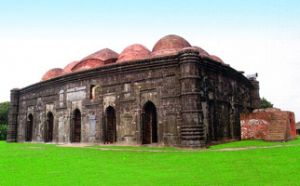 An inscription tablet still fixed over the central doorway records that the mosque was built by one Majlis-al-Majalis, Majlis Mansur Wali Muhammad bin Ali.

The Arabic letters in the inscription, giving the exact date of construction, have been obliterated. But the name of Sultan Alauddin husain shah (as written in the text...defender of Islam and of the Muslims, Sultan Ala al-dunya wal-din) suggests that the mosque must have been built sometime during his rule (899-925 AH/ 1493 -1519 AD).

The mosque is one of the best-preserved Sultanate monuments under the protection of the Department of Archaeology and Museums, Government of Bangladesh. The gilding employed in the ornamentation that has given the building its appellation Chhota Sona Masjid (Small Golden Mosque) does not exist now. An outer wall originally surrounded the mosque premise, which covers an area of 42m from east to west and 43m from north to south, with a gateway in the middle of the east side. Leaving only the gateway, the entire surrounding wall has completely disappeared, but its trace can still be clearly detected at places. Barbed wire fencing has now been erected in line with the original enclosure wall. Local people report that near the gateway, there was originally a stepped masonry ghat with approaches from the south.

Built of brick and stone, the mosque proper forms a rectangle. It has an outside dimension of 25.1m from north to south and 15.9m from east to west. All four walls are veneered externally and to some extent also internally with granite stone blocks. The stone facings on the southern side of the west wall have disappeared because of conservation works after its destruction by the great earthquake of 1897. The four exterior angles of the building are strengthened with polygonal towers, of which nine facets are visible. There is a rectangular projection in the centre of the exterior face of the back wall corresponding to the central mihrab. The cornices are bow-curved and have stone gutters to drain off the rainwater from the roof.

There are five doorways in the eastern facade and three each on the north and south walls. Corresponding to the archways in the east wall there are five semi-circular mihrabs inside the west wall. The stones of most of these mirabs are now gone making the entire west wall bare, although at one time they constituted the most beautiful part of the Mosque.

The interior of the mosque, measuring 21.2m by 12.2m is divided into three north-south aisles by two rows of stone pillars, four in each row. A wide central nave has cut the aisles into two equal halves, each half showing six equal square units of 3.5 m a side. The interior of the mosque has therefore a total of fifteen units, of which the three rectangular units are covered with chauchala vaults, and each of the remaining twelve square units by an inverted tumbler-shaped dome. They are all carried on radiating arches that spring from the free standing stone pillars and the engaged pilasters. But the upper corners in between the arches of the units are filled with corbelled brick pedantries to make up the transitional phase for the domes. At the northwest corner of the mosque there is a royal gallery forming an upper floor that is still standing, albeit in a dilapidated condition. It was approached from the northwest corner of the Mosque through a stepped platform connected with a doorway. The gallery has a mihrab in front.

The gateway of the surrounding outer wall in the east, now thoroughly renovated, is 7.6m long and 2.4m wide, which is in alignment with the central doorway of the mosque proper. The entire gateway was originally veneered with stone, but is now painted in stone-colour.

Stone carving, brick setting, terracotta gilding and glazed tiles were used in decorating the building, and of them the first one plays the dominant role. All fifteen domes and vaults over the roof, as witnessed by Creighton and cunningham, were gilded, but no traces of gilding now remain. The subject-matters of the stone carving were chosen according to the demand of the spaces, eg, the borders of the panels with creepers and their interior with various forms of stylised hanging patterns adopted from the chain and bell of the Hindu period. The spandrels of arches and the spaces above the frames have always been dotted with rosettes, an attractive form of design, but all carved differently. The interior of the domes and vaults are decorated with terracotta, those of the vaults being copies of the bamboo frames of local huts. The most noticeable form of ornamentation is the stone moulding encircling the corner towers. This constitutes the cornices and the lines above the doorways and frames. It should be noted that all the frontal archways and those of the mihrabs were all cusped, giving additional beauty to the monument.

The gateway in the east, like that of the mosque, was at one time veneered with stone-slabs carved with varieties of designs. But these designs have now mostly disappeared leaving a few boldly projected rosettes here and there.

At a distance of 14.5m to the east of the gateway is a stone platform measuring 4.2m north - south and 6.2m east - west. It is 1 m high and has a stone column to each of its four angles. Over the platform are two tomb-sarcophagi with their longer axis in the north - south alignment. Both consist of rectangular stepped terraces of black stone diminishing upwards and a top stone of simple pointed barrel-form containing verses from the Qur'an and some names of God. It is not clear who lies buried here. Cunningham suggests these to have been the tombs of Wali Muhammad, the builder of the Mosque, and his father Ali.

On the southeast corner within the mosque premise are two modern graves, enclosed by a 1.3m high brick wall, 4.1m from north to south and 4.7m from east to west. These two graves belong to Captain Mohiuddin Jahangir (d 14 December 1971) and Major Nazmul Hoque Tulu (d 27 September 1971), who died fighting against the Pakistani Army near Nawabganj town during the Bangladesh war of liberation.

The glamour of Chhota Sona Masjid has now diminished, but it still remains the most attractive monument of Gaur-Lakhnauti and the most desired spot for visitors to the area. [ABM Husain]