Chihilghazi Mosque and Mazar in ruins are located in Chihilghazi village, about 7km north of Dinajpur town. The mazar stands by the side of the mosque. Of the three inscriptions commemorating the erection of the mosque only one has survived, and is now preserved in Dinajpur Museum. The stone inscription records the date of its construction as 16 Safar, 865 AH (1 December 1460 AD) during the reign of Sultan ruknuddin barbak shah (1459-1474), whose wazir Ikrar Khan, ordered the construction of the mosque. Ulugh Nusrat Khan, the faujdar and jangdar of Jor (Purnia) and Barur (Dinajpur) pargana built it. 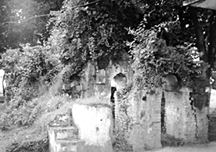 Only parts of the wall of the mosque have survived; that too in a dilapidated condition. No ornamentation is visible except on the mihrab wall, where there are a few pieces of terracotta plaques. Most of the plaques are loose and may fall off any time. The square mosque (4.90m on each side) had a veranda on its eastern side, and there were four domes covering the mosque; one over the square prayer hall and three smaller domes covering the veranda. There were three arched entrances on the eastern side and one each on the south and north sides. The central entrance on the east was slightly bigger than the flanking ones. The veranda (4.90m × 1.83m) also had three entrances on the east.

The qibla wall had three mihrabs, of which the central one was bigger than the flanking ones. The mihrabs are set within multi-cusped arches and in their decoration stones were used along with terracotta plaques. The plaques display floral, creeper, and hanging motifs.

Some people believe that a square Siva temple was converted into a mosque, but all the remains of the architectural features point to its being a mosque. However, there are scattered stones and bricks, including a gauripatta, around the nearby two large tanks with the remains of a masonry ghat, indicating that the area had a flourishing pre-Muslim habitation with a temple. The materials of the temple may have been used in the erection of the mosque.

Mazar The mazar possibly existed in the area before the construction of the mosque. Westmacott recovered three inscriptions from the Chihilghazi mosque in 1874. One of the inscriptions informs us that the mazar was renovated when the mosque was built in 1460 AD. However, the word Chihilghazi does not appear in the inscription. We come to know about Chihilghazi from Buchanon Hamilton's report. Montgomery Martin in his survey of Eastern India has also mentioned the name. Nowhere, however, is the time period of Chihilghazi mentioned.

Local tradition has it that forty Ghazis (religious warriors) were buried here together and hence the name Chihil (forty) Ghazi. The warriors became martyrs in a war against a local Hindu ruler named Gopala. In all probability, the war was fought during Sultan Shamsuddin iliyas shah's invasion of Kamarupa (1358). Two other wars were fought in nearby Kantanagar (Garh Mallickpur) and Khansama and the dead soldiers were also buried together. The mazar of the martyr-soldiers seems to have been repaired after about a century.

It appears that the original mazar did not have any roof. In 1968 the mazar was enclosed by a boundary wall, a roof was erected, and a gateway added. It then became a place of veneration. The newly built room (25.15m × 8.50m) has a decorative railing inside. There is an old grave outside the mazar to its east and there are three such graves to its south - all of brick masonry. To its southwest stand the old Chihilghazi mosque, and a modern mosque has also come up recently. There is a large pond (170m × 97m) to the northwest of the mosque; the pond has north-south elongation. There is a small pond to the east while the western side is covered with shal trees.

As one enters the mazar, from the left, one notices the graves of 135 freedom fighters who lost their lives on 6 January 1972 due to an explosion when they were engaged in sweeping mines left by the Pakistan army. [Sania Sitara]