Chittagong Club was established in 1878. The origin of the Chittagong Club Limited may be dated back to the year 1875 when WW Campbell, a well-known tea planter started a club in his lodge. It was placed at the disposal of only the Tea Planters of chittagong district but they had to make their own arrangement both for servant and food during their stay. 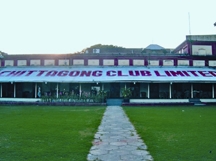 Campbell's provisional club became too small to provide facilities for a large number of European officials and facilities for increased number of European residents and on 23 August 1878 Campbell's Provisional Club was taken over by the Chittagong Club, which opened its doors to all European residents of the District in the building situated on the hill near the Telegraph Office.

To improve the services and accommodation new residential quarters were provided, Badminton Court was built, a Billiard table (Englishman's favourite pastime) was procured and everything was done to bring the club up-to-date as far as its limited resources allowed. The first Hon'y Secretary was R. D. Murray. But the club really attained some importance when DR Lyall a member of the ICS, and Inspector General of Police (1883-1887) and Commissioner of chittagong division (1887-1891) became the Chairman of the Committee.

The opening of the eastern bengal railway with its headquarters at Chittagong, the growth of jute export through Chittagong Port and some other positive factors further contributed to the growth of the white community in Chittagong. Houses of the Europeans sprang up on all hilltops and general tempo of life at Chittagong increased. The Club became too small for its large number of members and their guests.

In order to overcome this difficulty a new Clubhouse was erected at the present site which was known as Pioneer Hill and was originally the site of a Tea Garden planted in 1840. The land belonged to a big landlord of the time Rai Nityananda Rai Bahadur who gave the land to the club at a nominal rental.

The club was opened on the 27th March 1901 and in 1908 it was registered as a company. Organisationally, till 1947 it granted permanent membership to only the white and the number of members was limited to a maximum of 100 persons.

After 1947, the set up and character of the club has been changed considerably. The restriction on the number of membership was withdrawn. The racial bar to its bar membership was also withdrawn though social exclusiveness was largely retained. Only the persons of high social, educational, and financial standing are eligible to become members of the club.

Down the years up to the partition of bengal in 1947, the emergence of Bangladesh in 1971 and till date club membership rose to 1800 in different categories.

In addition to recreation, the club now undertakes cultural activities such as lectures, seminars, discussion sessions on national and international issues, and ceremonies to honour distinguished citizens. It also organises fund raising campaigns for cultural and humanitarian activities.

At present, Chittagong Club is affiliated with 52 of the finest clubs in the world. [Saifuddin Mohammed Tariq]