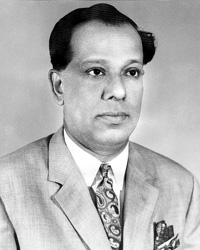 Chowdhury, Abdul Matin (1921-1981) scientist, educationist, Vice Chancellor, Dhaka University was born in the village Nandanpur under Lakshmipur district on 1 May 1921. Passed entrance in 1937 from Arunchandra High School of Noakhali and ISc from Dhaka Intermediate College in 1939. He received BSc (honours) and MSc degree in Physics (1942-43) from Dhaka University, with first class in both. He went to USA in 1946 on a government scholarship and obtained PhD in Atmospheric Physics (1949) from Chicago University.

Abdul Matin Chowdhury began his career as a meteorologist in the Pakistan Meteorology Department. Afterwards he joined as a Reader in the Physics Department (1950) of Dhaka University. He received a government scholarship and went to the UK in 1956 and conducted a research work on X-Ray Crystallography at London University for two years, then returned home because of ill health. He completed the research started in London at Dhaka University and received PhD for the second time in 1961.He was promoted to Professor of Physics in 1962, and was Head of the Department of Physics from 1962 to 1967. He also served as a Member of the Pakistan Atomic Energy Commission (1967-1970), Chief Scientist of the Ministry of Defence and the President’s Scientific Advisor (1970-1971).

In 1971, during the war of liberation, he was imprisoned in Pakistan. After independence, he returned from Pakistan and in 1973 was appointed vice-chancellor of Dhaka University where he served till 1975.

Professor AM Chowdhury was honoured with visiting fellowship by the Wolkson College of Oxford University in 1976. The Syndicate of Dhaka University established a Chair in the Physics Department named after the world famous physicist Satyendra Nath Bose and appointed Prof Chowdhury as the first 'Bose Professor' in 1974. Abdul Matin Chowdhury died in Dhaka on 24 June 1981. [Md Mahbub Murshed]