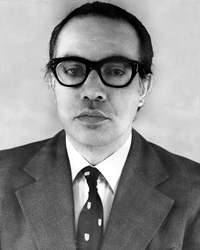 Chowdhury, Fazlul Halim (1930-1996) scientist and educationist. Born in the village of Kunjasreepur of Comilla district, Fazlul Halim Chowdhury received the MSc degree in Chemistry from Dhaka University and PhD from Manchester University on an '1851 Exhibition Scholarship'.

Professor Chowdhury was a Fellow of the Nuffield Foundation, Cambridge University from 1960 to 1962; Commonwealth Academic Staff Fellow of the same university from 1972 to 1973; Senior Fellow of the Asia Foundation and American Association for the Advancement of Science in 1984. He was a member of the university grants commission from 1974 to 1976. He was elected president of Bangladesh Association for the Advancement of Science in 1982 and the bangladesh chemical society in 1984. Professor Chowdhury was appointed chairman of the College Reorganisation Committee in 1975 and also a member of the advisory council for reorganisation of the education system in 1983. Professor Fazlul Halim Chowdhury died on 9 April 1996. [Md Mahbub Murshed]