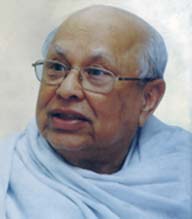 Chowdhury, Mahbub ul Alam (1927-2007) poet, journalist, a writer and activist of the Bengali Language Movement and composer of the first poem on 21 February 1952. As an instant reaction to the police action and consequent deaths of several activists at Dhaka University, Mahbub ul Alam Chowdhury wrote the famous poem on 'Ekushey' (February 21, 1952): Kadte Ashini Fasheer Dabee Niye Eshechhi,' which was the first nationally acclaimed poem on the language movement.

Mahbub ul Alam Chowdhury was born on 7 November 1927, at the house of Asad Chowdhury of Gohira at Raujan in Chittagong. His Father’s name was Ahmadur Rahman Chowdhury and Mother’s was Rowshan Ara Begum. Mahbub ul Alam passed the Entrance Examination with distinction from Gohira High School in 1947. While studying intermediate (IA) in Chittagong College he left Chittagong for political reasons.

Mahbub ul Alam Chowdhury was politically active during the early stage of his student life. He Joined Chittagong District Students’ Congress in 1942. In 1945, he joined the Students Federation, a Muslim students association during pre-partition days. The Bengal Regional Students Conference was held in Chittagong the same year.

Manik Bandopadhyay, Gopal Haldar, Bhabani Sen and Sukanta Bhattacharya attended the conference from Kolkata. He played a key role in holding the conference. He was elected as the Assistant Secretary of the Chittagong Progatishil Lekhak Shilpi Sangha (Progressive Writers and Artists Association) in the same year. MA Chowdhury was an active organiser, under the leadership of Ahmed Sagir Chowdhury (his maternal-uncle), of the felicitation meeting held in 1946 at J.M. Sen Hall on the occasion of the release of the valiant revolutionaries of the Chittagong Armoury raid. The Anti-riot Peace Committee was formed in the same year and he participated actively in the anti-riot activities and went to different areas advocating communal harmony. He wrote a booklet on the issue in 1946, titled 'Biplab'. In November 1947, a progressive monthly literary magazine titled Shimanto edited by him (1947-1952) was published from Chittagong, The Anti-riot edition (1950) of Shimanto was highly appreciated as a pioneering effort on the progressive movement. In total 48 issues of Shimanto were published in five years. Most of them were destroyed during the Liberation War of 1971 for reasons of security from the Pakistani occupation army.

Mahbub ul Alam Chowdhury played the leading role in organising the procession protesting the first mass killing by Pakistan government that took place at Mothershar Tek near the Halda River, Chittagong in 1948. The farmers of this region would have benefited immensely had the small 'Teks' been dug properly. But the Pakistan government did not allow this. When the farmers tried to do it, police fired on the farmers and killed eighteen of them.'

Mahbub ul Alam Chowdhury organised a protest meeting against the Pakistan Government's Fundamental Policies of Pakistan (1950), which failed to include Bangla as the state language of Pakistan. In the report there was no mention about the autonomy of East Pakistan and recognition of Bangla to be one of the state languages. In the same year (1950) the 'Bishwa Shanti Porishad' (World Peace Council) of East Pakistan was formed in Chittagong. Mahbub-ul-Alam was the Secretary of the Council. In the same year, he formed a committee called 'Shanti Fauj' (Peace Corp) and the Anti-riot Peace Committee with the aim of combating communal riots in Chittagong.

In 1951, he joined the Youth Conference held at Dhaka with five representatives from Chittagong. The East Pakistan Jubo (Youth) League was set up there. He became the Convenor of the Chittagong District Rastrabhasha Sangram Parishad (State Language Movement Council) in 1952. The first non-communal political party called Ganotontri Dal (Democrat Party) was formed in 1953. Alam was a member of its central committee as well as the Secretary of the Chittagong District Committee of the party.

Mahbub ul Alam Chowdhury worked as the Convenor of the Committee working for the Jukto Front (United Front) in Chittagong in 1954. He participated in 'Kagmari Conference' organized by Moulana Bhasani with a cultural troupe from Chittagong in 1957. After 1965, he decided to discontinue from direct political activities. Then onwards he kept himself engaged mainly in cultural activities.

He founded Gohira Degree College at Raujan, Chittagong in 1968. He was the Chairman of the Editorial Board of the Daily Swadhinata in 1972 published from Chittagong (1972-1982). In 1975, he came to Dhaka and get settled here permanently. He was one of the forerunners of establishing the most reputed cultural organisation, Kristi Kendra and monthly' Sahittya Baithak in Chittagong.