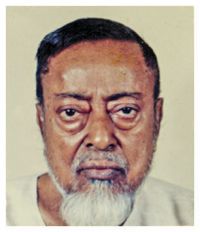 Chowdhury, Mahmudun Nabi (1908-1995) politician, social activist. He was born on 7 January 1908 at Uttar Kattali in Chittagong. His father was Khadem Ali Chowdhury and mother Alfun Nesa. He passed matriculation examination in 1930 from Government Muslim High School, I. Sc from Chittagong College in 1932 and obtained his BSc degree from the same college in 1934.

In 1934, Mahmudun Nabi took a job in Calcutta Metrological Department. He was a part time accountant in Maulana Company in Kolkata in 1936. He opened a shop styled as Chowdhury and Brothers in 1937 in Lower Chitpur Road, Kolkata dealing in cloth. After partition, he started business in 1948 at Khatunganj in Chittagong.

Mahmudun Nabi Chowdhury was active in politics. He was elected commissioner of Chittagong Municipality in 1949. He joined Krishak-Sramik Party in 1953 headed by AK Fazlul Huq. He was elected a member of the Provincial Assembly from Double-Mooring-Sitakunda constituency as a candidate of united front. He was a minister in the United Front cabinet in charge of the Ministry of Public Relations and later the Ministry of Relief and Rehabilitation. The notable works under his ministry were the establishment of Film Development Corporation (FDC), construction of embankment in the coastal area and introduction of test relief. With the promulgation of martial law in 1958 he resorted to anti-Ayub stand.