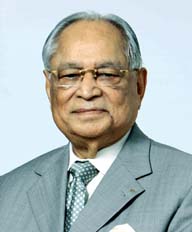 Chowdhury, Samson H (1925-2012) a leading personality of his time in entrepreneurial drive, innovative ideas, business management and human resource development, was born on 25 September 1925 in the district of Faridpur. Samson H Chowdhury, son of Dr EH Chowdhury, received education at Bishnupur High School in Kolkata from 1930-1940 and obtained his Senior Cambridge from the same school.

Samson H Chowdhury got his early fortune and fame from the Square Pharmaceuticals established in 1958 which was turned into a Public Limited Company in 1991. He made his Square Pharmaceuticals a stepping-stone to further expansion of his business initiatives. Soon he turned out an entrepreneurial leader in the country. He organised his vast business investment and organisational structure in a variety of ways.

In all these industries, Samson H Chowdhury invested thousands of millions of taka, and generated jobs for the unemployed in every industrial unit. With more than 4000 employees at the time of his death, Square is now one of the most influential pharmaceutical companies in Bangladesh, of which he was the chairman. All these not only meant investments and consequent developments of economic life of the country through generation of employment and public revenue but also public benefactions to the millions of people. Samson H Chowdhury earned immense recognition for his outstanding activities. The national board of revenue recognised him as one of the top taxpayers of the country since 2005. He was honoured as a VIP (Very Important Person) of the state. In the entrepreneurial society, Samson Chowdhury was regarded as a patriarch of the business community. He held the positions of president of Metropolitan Chamber of Commerce, International Chamber of Commerce (Bangladesh), Bangladesh Pharmaceutical Association, Bangladesh Association of Publicly Listed Companies, Bangladesh Herbal Products Manufacturing Association, Mutual Trust Bank Limited and bangladesh freedom foundation (formerly Ford Foundation). He received many awards from the business community for his remarkable contributions to industrial and commercial development of the country including Mercantile Bank Award (2003), Bankers Forum Award (2005) for maintaining unique business ethics, ICAB National Award for Best Published Accounts and Reports (2006) in the Manufacturing Sector.

Samson H Chowdhury was a devoted Christian and humanist. His charity knew no religious or regional bounds. At the request of his Muslim employees of the Sabazpur Tea Estate he built a madrasah called Suzaul Madrasah. His charity to needy people of all religions working in his industrial units was well-known to all. Samson H Chowdhury died on 5 January 2012. [Sirajul Islam]