Chunarughat Upazila (habiganj district) area 495.49 sq km, located in between 24°04' and 24°17' north latitudes and in between 91°22' and 91°39' east longitudes. It is bounded by habiganj sadar and bahubal upazilas on the north, tripura state of India on the south, sreemangal upazila and Tripura state of India on the east, madhabpur upazila on the west. The upazila town is well known as an old business centre.

Administration Chunarughat Thana was established in 1914 and it was turned into an upazila in 1983. 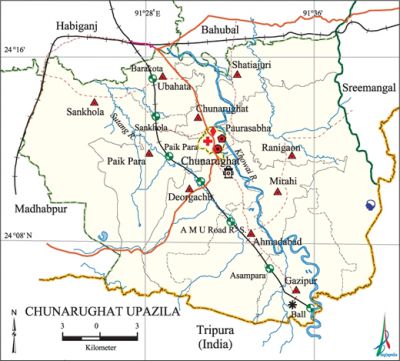 Archaeological heritage and relics Remnants of the architecture and stone inscription of the Murarbandar Dargah Sharif.

Historical events Rajapur of this upazila was the capital of Tipra king Achaknarayan who was defeated in a battle with the army of Syed Nasiruddin, Commander of the Bengal Sultan Firoj Shah in 1304 AD.

Religious institutions Mosque 338, temple 29, tomb 5, most noted of which are the tombs of Syed Shah Gada Hasan (R) and Syed Sharful Hasan (R) of village Narapati.

Hats, bazars and fairs Hats and bazars are 23, most noted of which are Chunarughat Bazar, Chandpur Garden Bazar, Amu Road Bazar, Nalmukh Bazar and Haziganj Bazar.