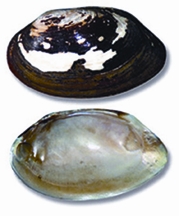 Clams and Mussels (jhinuk) common name for certain bivalve molluscs, especially the marine species. Some of these are edible and breed in appreciable numbers in different parts of the bay of bengal and its adjacent estuaries. Some mussels such as Mytilus edulis remain attached to the substratum with the help of byssal threads. The freshwater mussel Lamellidens marginalis often occurs in great numbers in many rivers, lakes, beels and haors, and are collected for pearl and lime. They are filter feeders in which feeding and oxygen uptake are closely associated.

The clams belonging to the genus Meretrix are benthic and have triangular ovate shell. They are highly valued as food. In spite of the availability of these resources in Bangladesh coasts, very little attention has been paid to exploit the shell fisheries. The fin-fish eating population of this country has not yet developed a liking for these items. Some people of the coastal region, however, use them as food or fish bait. Recently, efforts have been made to use the soft edible parts of the clams and mussels as ingredients of shrimp feed and fin-fish feed. Shells of these bivalves are also being used in manufacturing lime, preparing decoration pieces, and in ornamentation.

Mussels and clams represent an important food source in many parts of the world, including Europe, South America, and the Far East, and they have considerable potential as a valuable protein source for many developing countries. [AKM Abdul Matin]