Climate the average condition of the atmosphere near the earth's surface over a long period of time, taking into account temperature, precipitation, humidity, wind, cloud, barometric pressure, etc. Geographical location and physical settings govern the climate of any country. Bangladesh extends from 20°34'N to 26°38'N latitude and from 88°01'E to 92°41'E longitude. Except the hilly southeast, most of the country is a low-lying plainland. It is surrounded by the Assam Hills in the east, the Meghalaya Plateau in the north, the lofty Himalayas lying farther to the north. To its south lies the bay of bengal, and to the west lie the plainland of west bengal and the vast tract of the Gangetic Plain. 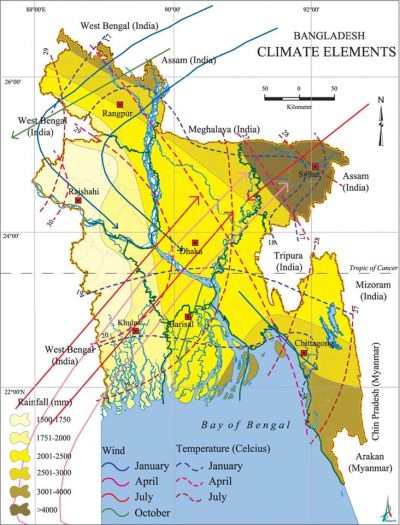 Bangladesh is located in the tropical monsoon region and its climate is characterised by high temperature, heavy rainfall, often excessive humidity, and fairly marked seasonal variations. The most striking feature of its climate is the reversal of the wind circulation between summer and winter, which is an integral part of the circulation system of the South Asian subcontinent. From the climatic point of view, three distinct seasons can be recognised in Bangladesh - the cool dry season from November through February, the pre-monsoon hot season from March through May, and the rainy monsoon season which lasts from June through October. The month of March may also be considered as the spring season, and the period from mid-October through mid-November may be called the autumn season.

The pre-monsoon hot season is characterised by high temperatures and the occurrence of thunderstorms. April is the hottest month when mean temperatures range from 27°C in the east and south to 31°C in the west-central part of the country. In the western part, summer temperature sometimes reaches upto 40°C. After the month of April, the temperature dampens due to increased cloud cover. The pre-monsoon season is the transition period when the northerly or northwesterly winds of the winter season gradually changes to the southerly or southwesterly winds of the summer monsoon or rainy season (June-September). During the early part of this season, the winds are neither strong nor persistent. However, with the progression of this season wind speed increases, and the wind direction becomes more persistent.

During the early part of the pre-monsoon season, a narrow zone of air mass discontinuity lies across the country that extends from the southwestern part to the northeastern part. This narrow zone of discontinuity lies between the hot dry air coming from the upper Gangetic plain and the warm moist air coming from the Bay of Bengal. As this season progresses, this discontinuity weakens and retreats toward northwest, and finally disappears by the end of the season, making room for the onset of the summer monsoon. The rainy season, which coincides with the summer monsoon, is characterised by southerly or southwesterly winds, very high humidity, heavy rainfall, and long consecutive days of rainfall which are separated by short spells of dry days. Rainfall in this season is caused by the tropical Depressions that enter the country from the Bay of Bengal.

Atmospheric pressure and winds These are characterised by seasonal reversals between summer and winter in Bangladesh. During the winter season, a centre of high pressure lies over the northwestern part of India. A stream of cold air flows eastward from this high pressure and enters the country through its northeast corner by changing its course clockwise, almost right-angle. This wind is the part of the winter monsoon circulation of the South Asian subcontinent. During this season, wind inside the country generally have a northerly component (flowing from north or northwest).

On the other hand, during the summer season, a centre of low pressure develops over the west-central part of India because of intense surface heat. As a result, a stream of warm and moist air from the Bay of Bengal flows toward the above-mentioned low pressure through Bangladesh (similar flow prevails from the Arabian Sea toward India). This wind is the part of the summer monsoon circulation of the sub-continent. So, the prevailing wind direction in Bangladesh during the summer season has generally a southerly component (flowing from the south, southwest or southeast). However, wind directions during the transition seasons (in spring and autumn) are variable. Generally, winds are stronger in summer (8-16 km/hr) than in winter (3-6 km/hr). The mean pressure is 1,020 millibars in January and 1,005 millibars during March through September. 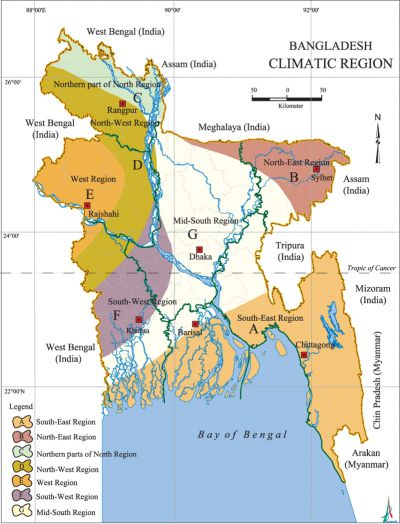 Rainfall The single most dominant element of the climate of Bangladesh is the rainfall. Because of the country's location in the tropical monsoon region, the amount of rainfall is very high. However, there is a distinct seasonal pattern in the annual cycle of rainfall, which is much more pronounced than the annual cycle of temperature. The winter season is very dry, and accounts for only 2%-4% of the total annual rainfall. Rainfall during this season varies from less than 2 cm in the west and south to slightly over 4 cm in the northeast. The amount is slightly enhanced in the northeastern part due to the additional uplifting of moist air provided by the Meghalaya Plateau. As the winter season progresses into the pre-monsoon hot season, rainfall increases due to intense surface heat and the influx of moisture from the Bay of Bengal. Rainfall during this season accounts for 10%-25% of the total annual rainfall which is caused by the thunderstorms or nor’wester (locally called Kalbaixakhi [Kalbaishakhi]).

Weather report Bangladesh Meteorological Department prepares the weather reports of the country. The department is responsible for observation, recording, operation and maintenance of weather stations and weather instruments, and for reporting of daily/weekly weather information to the public. Every day, all weather stations around the country transmit their recorded data electronically to the Headquarters of the meteorological department in Dhaka. The details of data are analysed, interpreted and mapped here. The result of the analysis, combined with the observation of upper air, satellite imagery and radar imagery (collected in Dhaka) are used for weather forecasting. Observation and interpretation of satellite and radar imageries are important for prediction of severe weather and cyclones. Weather bulletins and forecasting by the Bangladesh Meteorological Department for 6-hour, 12-hour and 24-hour periods are broadcast on radio and television. During an impending cyclone, observation and forecasting are made and warnings issued almost continuously through radio and television. In addition to radio and television, daily newspapers publish weather reports regularly on the basis of information supplied by the meteorological department.

Climatic change Any climatic change in Bangladesh will, of course, be a part of worldwide climatic changes. It is generally claimed that the temperature of the earth has been increasing since the beginning of the 20th century. This phenomenon, called global warming, is attributed to the increase in atmospheric carbon dioxide (CO2) due to the burning of fossil fuel. However, not all scientists subscribe to the global warming hypothesis.

According to some analysts, the effects of increased temperature will have both destructive and beneficial consequences - destructive to some areas and beneficial to other areas. Global warming will cause the polar ice caps and Himalayan ice caps to melt at a slow pace. As a consequence, it is estimated that the sea level will rise 2-3 metres by the year 2050. In that case, all low coastal plains and delta areas around the world will be submerged - thereby reducing the area of fertile agricultural lands and food production, and increasing food shortage, hunger, poverty and human misery on a global scale. If this prediction comes true, then a significant area of the southern half of Bangladesh will be submerged by the Bay of Bengal. However, there is another side to the argument. Actually climatic changes on a global scale do not occur overnight; in fact, they occur only over a time scale of thousands of years. [Rafique Ahmed]