Crustacean common name for the members of arthropod class Crustacea. They are predominantly aquatic, marine or freshwater; few live in moist places on land, while few are parasitic. They have a segmented body and appendages at some stage of their life, typically with one pair antennule and one pair antenna. Their integument or cuticle is composed of a substance called chitin and they grow in size through molting. Sexes are separate or united, but sexual dimorphism is common. Development includes metamorphosis with free larval stage. This class includes crabs, shrimps, lobsters, barnacles, water-fleas, fish lice, hermit crabs, sow bugs, and pill-bugs. So far about 26,782 species have been identified. 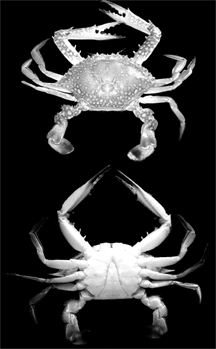 Many commercially important fresh water and marine crabs, shrimps and lobsters are found in Bangladesh. Of the four species of freshwater and 11 species of marine crabs recorded from Bangladesh, the most commercially exploited species of the coastal area is Scylla serrata (mud crab). It fetches high price in the international market. Neptunus pelagicus, N. sanguinolentus, and Gelasimus annulipes are also commercially important marine crabs. The other marine crabs are relatively smaller is size and less valued. Of the four species of freshwater crabs only the Paratelphusa lamelliforns is used as food. About 57,92,000 US$ were earned in 1995 by exporting crabs to 10 countries of Asia, Europe, and USA.

Shrimp fishery includes both capture and culture fishery. Shrimps are captured from the four fishing grounds of the bay of bengal in an area of about 7,800 sq km of the Exclusive Economic Zone of Bangladesh and are cultured in about 1,45,000 ha of the coastal area. M. rosenbergii are captured from vast areas of haors, baors, beels, and rivers of Bangladesh and are nowadays cultured in ponds. Some hatcheries produce fries of M. rosenbergii; large number of juveniles are also collected from different rivers to promote shrimp culture. Six hatcheries are in operation in Cox's Bazar and Khulna areas for producing fries of P. monodon. A large number of natural fries are also collected from the coastal waters of Cox's Bazar and Khulna. Out of about 9,31,788 m tons of world production of penaeid shrimps, about 34,030 m tons were produced in Bangladesh in 1995.

Six species of lobsters are found to occur in the bay of bengal. These are mainly found in the rocky or sandy areas of the continental shelf of Bangladesh. They are usually caught from the vicinity of st martin's island by set gill net, shrimp trawl and pathure jal. Panulirus polyphagus and Thenus orientalis are the two most commercially important species.

Artemia, or the brine shrimp, constitutes the most important live feed of the penaeid shrimp larvae. Prospects of its mass culture in the brine water of the salt beds of Bangladesh is very bright. Daphnia, Cypris and several copepods are important zooplankters in freshwaters, and these are food of many fish and other crustaceans. The parasitic fish lice Argulus infests a wide variety of freshwater fishes including the major carps. Of the marine zooplankters about 15-20 species of copepods are considered predominant. [Md Abdul Kader]