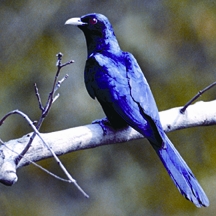 Cuckoo (kokil) name for a group of birds of the order Cuculiformes, which includes the families Coccyzidae (American cuckoos), Cuculidae and Centropodidae (Old World cuckoos). About 130 species of cuckoos are distributed almost worldwide. In Bangladesh there are 20 species of which 14 are resident and 6 are migratory. Among the resident cuckoos in Bangladesh, one is endangered, while the status of 4 species could not be evaluated due to paucity of data.

Cuckoos are long and slim birds, with slightly curved bills, long tails, and elongated, pointed wings. Each foot has two toes pointing forwards and two backwards. The cuckoos of the Old World are tree dwellers, and include at least 50 species that are brood parasites ie they lay their eggs in the nests of other species, sometimes mimicking the host eggs. 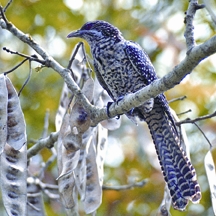 These cuckoos do lay their eggs directly into the nests of other birds, sometimes the nest that they parasitize is small and enclosed. While the host is away from the nest, the cuckoo removes one of the host's eggs and replaces it with one of its own. The young cuckoo hatches quickly, in about 12 days. It is entirely naked at this stage. Soon it disposes of its nest mates - the foster parents' eggs or newly hatched young - by getting them on its back and pushing them over the edge of the nest. Thus the young cuckoo receives all the food and care of the foster parents. Cuckoos generally seem to be solitary because the males are often very conspicuous and noisy with persistent bouts of loud, striking, and rather monotonous calls, even at night, whereas the females are unobtrusive and have different, even muted, calls. Thus the Common Hawk Cuckoo, a resident bird of Bangladesh is sometimes called a Brainfever Bird. Hairy caterpillars form a large part of the diet.

In Bangladesh the Pied Cuckoo (Papiya), Indian Cuckoo (Bau-Kotha-Kou Pakhi), Asian Cuckoo (Kokil), and Common Hawk Cuckoo (Chokhgelo Pakhi) are associated with many legends and beliefs. The very name Bau-Kotha-Kou indicates the bereavement call of a husband to his dearest wife. People believe that the bird is the incarnation of that saddened husband. For many people, the name 'Kokil' will conjure a symbol of spring.

Koel Either of two black Oriental and Australian cuckoos with long tails. The Oriental Koel that occurs in Bangladesh is also known as Asian Cuckoo, Eudynamys scolopacea, which belongs to family Centropodidae (previously under family Cuculidae), order Cuculiformes. It is a familiar bird for its shrieking call, kuoo-kuoo-kuoo, one of the earliest bird voices at dawn. The female utters a sharp, and quick-repeated kik-kik-kik-kik as it moves from tree to tree.

Koel is a slim, House Crow-sized bird. The male is glistening black, with yellowish green bill and crimson eyes. The female is dark brown, with profusely spotted and barred with white. It prefers leafy trees for foraging; generally silent in winter, thus known as absent. However, with the approach of summer and its breeding season, it becomes increasingly noisy, thus is popularly known as a bird of spring. The bird does not build nests and is brood-parasitic (lays eggs in the nests of other birds) on a number of other bird species' including the crows, and its breeding season (April-August) coincides with that of Jungle Crow and House Crow. Eggs, look similar in appearance to hosts' eggs. Eggs and nestlings of host and koel are found together in the same nest. The adult female koel are also observed to feed the nestlings. The bird largely feeds on fruits; it also takes various insects and caterpillars. [Md Anwarul Islam]