Cunningham, Sir Alexander (1814-1893) called the 'Father and Founder' of the Indian Archaeological Survey, was the second son of poet and author Allan Cunningham, a native of Dumfrieshire, Scotland. Commissioned as Second Lieutenant in the Bengal Engineers on 9 June 1831, Cunningham landed in Calcutta on 9 June 1833. After a distinguished career he retired from the army with the rank of Major General on 30 June 1861. Soon after his arrival in Calcutta james prinsep, who was then making important discoveries in Indian archaeology, initiated him into its study. While in service Cunningham made a hobby of systematically studying Indian antiquities. 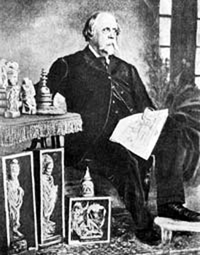 In November 1861, after his retirement from the army, Cunningham sent a memorandum to lord canning recommending the establishment of the archaeological survey of india. Canning accepted the recommendation and Cunningham was appointed the Director of the Survey. In 1885 Cunningham retired from the post and returned to England.

Between 1861 and 1885 he made innumerable discoveries of coins, inscriptions, sculptures and architecture. In the process he laid the foundation of ancient Indian history and of the study of Indian epigraphy, numismatics, art and architecture. He was a true pioneer. However, his most important contribution lay in identifying the long-lost Indian cities - one of the most interesting being in Bengal, the city of pundranagara.It is remarkable how many ancient Indian sites were identified by him. Perhaps his greatest contribution was the listing of innumerable sites all over northern India. For about half a century Cunningham remained almost the embodiment of Indian Archaeology. The student of Indian history and archaeology is only too aware of his great indebtedness to the unremitting labours of this remarkable man. Whatever branch of ancient Indian history he may choose to study he cannot proceed without noticing Cunningham’s works.

With the establishment of the Survey a new phase opened in Indian epigraphy, and it reached its climax with the publication of his Inscriptions of Ashoka (Calcutta, 1877), the first volume of Cunningham's projected Corpus Inscriptionum Indicarum series. Of the 27 or so main inscriptions in Fleet's Corpus Inscriptionum Indicarum no less than 17 are Cunningham's discovery. He discovered a very large number of inscriptions, and when deciphered - many of them by Cunningham himself - these helped to illumine many a dark corner of Indian history.

The same is true about coins. He was one of the greatest collectors of all times and many new types and varieties were discovered by him. After Prinsep's departure, writing on Indian coins for many years was almost monopolised by Cunningham. He provided us with the first chronological framework for the whole series of ancient Indian coins. His papers in Alexander's Successors in the East were then the only full accounts of the Indo-Greek series of coins, and bear witness to the remarkable knowledge and ingenuity of their author. No writer on Indian coins can hope to produce a scholarly study without looking through Cunningham's works.

He was also a great elucidator of ancient Indian geography. In his earlier years he had carried out some of the most adventurous geographical explorations ever to have been undertaken in India. His travels for over half a century, including those of archaeological explorations, had been very extensive through the length and breadth of Northern India and beyond - from Peshawar and Multan to Rangoon and Prome, and from Kashmir and Ladak to the mouth of the Indus and the banks of the Narbada. He justifiably felt that the writing of his The Ancient Geography of India was not undertaken without previous preparation.

However, Cunningham paid less attention to Bengal antiquities. His only tour devoted entirely to the sites in Bengal was in 1879-80. His only other tour in Bengal was in 1871-72, when he managed a hurried visit. He visited sonargaon and in dhaka he visited the tomb of bibi pari and in vikramapura, Ballal Bari, the palace of vallalasena and the tomb of baba adam and collected 12 Muslim inscriptions including those of Sonargaon. He also visited pandua, Hazrat Pandua and gaur.

The adina mosque in Hazrat Pandua impressed him as a great building. The chief aim of his second visit (1879-80) was to obtain the plans and detailed accounts of the buildings of Gaur and Hazrat Pandua, particularly as an addition to Ravenshaw's work. His other aim was to try and find the ancient capital of Bengal-Pundranagara- which had been unconvincingly located by Westmacott at Bardhankot (Dinajpur) in 1874. Cunningham was significantly successful in his quest and found the remains of the city in Mahasthan (Bogra). He also visited paharpur where his attempts at excavation were foiled by the zamindar who owned the site. Among the other ancient sites of Bengal visited by him on this occasion the most noteworthy were Devikot, Dhaka, Malda and Sonargaon. [Abu Imam]