Daria-i-Noor a famous diamond, belongs to the grandeur of Kohinoor, and is the largest and most precious jewel stone to be found in Bangladesh. It has an oblong table shaped surface. It is set in the centre of a gold armlet with ten oval shaped smaller diamonds around it. The main diamond is 26 carats, while the others are 5 carats each, amounting to a total of 76 carats. Being Indian, it is absolutely perfect in lustre. It is believed that like the Kohinoor this one too was quarried in a south Indian mine. 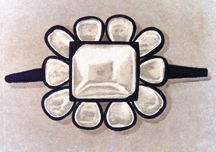 For a long time Daria-i-Noor was in the possession of Maratha kings before it was purchased by the ancestors of Nawab Sirajul Mulk of Hydarabad for one lac thirty thousand takas. Afterwards, like the Kohinoor, it went to the possession of a Persian emperor.

The diamond got its name while it was in Persia. At last Ranjit Singh, the ruler of Punjab, captured it. When the British subdued Punjab in 1849, the east india company acquired many valuable things from the treasury of Maharaj Dilip Singh, including the Kohinoor and Daria-i-Noor. At that time the price of Daria-i-Noor was estimated at Tk 63,000. The Kohinoor was presented to Queen Victoria. Other jewels and pearls remained with the company. In 1850 a substantial number of jewels, including the Daria-i-Noor were sent to London for display, along with the Kohinoor, in the Great Exhibition at Hyde Park, organised in honour of Queen Victoria.

Since the exhibits did not get the expected price it was decided that they would be sent back to India to be sold in an auction. On behalf of the British government Hamilton and Company of Calcutta auctioned the jewellry in November 1852. At that time Khwaja alimullah purchased the Daria-i-Noor for Tk 75 thousand. The nawabs of Dhaka used it in an armlet; it could also be used as an ornament on the turban.

The nawab of Dhaka published an album containing information and photographs of the notable jewels in his collection with the help of Hamilton and Company. In that album, the Daria-i-Noor appears. In 1887 Viceroy Lord dufferin and Lady Dufferin came to the Nawab's house at Baliganj in Calcutta and saw the diamond. The price of Daria-i-Noor was estimated at Tk five lacs in 1908 when Nawab salimullah mortgaged it to get loan from the government. Nawab Salimullah wanted to sell the diamond for repaying the loan. Accordingly, it was sent to England in 1911 under the supervision of Hamilton and Company. The diamond could not attract Europeans and the value did not go beyond 1500 pounds. Against this backdrop the diamond was recalled and was kept in Calcutta up to 1948 under the custody of the said company.

In 1912 Emperor George V and Queen Mary saw the diamond while visiting Calcutta. Following the death of Salimullah, the custody of the diamond went to the Chief Manager of Dhaka Nawab Court of Wards Estates. After the creation of Pakistan it was transferred from Calcutta and deposited in the Dhaka branch of Imperial Bank of India. Presently it is preserved in a vault of sonali bank. An examination by experts in 1985 testified the genuineness of' the diamond. [Mohammad Alamgir]