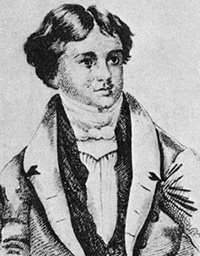 Derozio, Henry (1809-1831) poet, rationalist thinker and teacher. Henry Louis Vivian Derozio was appointed a teacher of the Calcutta hindu college in May 1826 when he was only seventeen. The subjects he taught were English literature and history. His mode of teaching was very unconventional. He loved to discuss new ideas and motivate his students to independent thinking. In fact, Derozio's activities as a teacher were not confined to the classrooms. He loved to converse with his students even outside the College premises, frequently at his own residence, on any matter which aroused their interests. In fact, his discourses covered a wide range of subjects- literature, history, philosophy and sciences.

Soon he was able to arouse in them so much enthusiasm that in 1828 he helped them in establishing a literary and debating club of their own known as the Academic Association, which provided a common meeting ground outside the restrictions of the classroom where young men under his guidance could discuss freely the various topics that absorbed their attention. The Academic Association was a successful venture and its fortnightly meetings, which were held at a garden house at Manicktola, were attended by a large number of students and some liberal-minded and philanthropic Europeans.

The success of his teaching method encouraged his students to establish similar associations in various parts of Calcutta. Although Derozio was president of the Academic Association, he was also connected with most of the other societies as a member and took active interest in their activities.

Derozio's teachings promoted a critical outlook among his students who began to express doubt and dissatisfaction with the existing state of things and affairs. Influenced by the rationalist philosophy of David Hume and Jeremy Bentham and radical thinkers like Thomas Paine, they had begun to measure everything with the yardstick of reason. Towards religion their attitude was Voltairean. They did not hesitate to denounce openly the Hindu religion.

Derozio's teachings produced great anxiety in the traditional Hindu society. He was accused of promoting heresy among his students most of whom came from orthodox Hindu families. The matter was brought to the notice of the Managing Committee of the hindu college, which was led by conservative Hindus led by Raja radhakanta deb (1784-1867). Derozio was dismissed from the Hindu College in April 1831. His dismissal, however, did not curb the radical movement. In fact, Derozio had now more freedom than before to express and advocate his ideas. Nor did he loose contact with his students.

Derozio was also actively involved in promoting the welfare of his Eurasian community, and had begun editing a daily English newspaper, The East Indian. He now encouraged some of his young Hindu disciples to take to journalism and disseminate their radical ideas through this important medium. Thus, krishna mohan banerji had started in May 1831 an English weekly newspaper, The Enquirer, and in the following month Dakshinaranjan Mukherji and Rasik Krishna Mallick began to publish a Bengali (later also English) newspaper, the Jnananvesan. Through these journals, apparently conducted under Derozio's guidance, the young radicals launched bitter attacks upon Hindu orthodoxy.

The premature death of Derozio in December 1831 gave a severe blow to the cause of the nascent radical movement. Nevertheless, the spirit of enlightenment which this remarkable teacher had kindled in the minds of his young Hindu students continued to inspire succeeding generations and left a permanent impact on the social outlook of the Bengali Hindu community. [AF Salahuddin Ahmed]