Deva Dynasty ruled in samatata with devaparvata as their capital. The dynasty is now known in greater details from the mainamati excavations. Though a number of their inscriptions, coins and seals were known, the importance of their rule was actually revealed through the discovery of archaeological remains recovered' from the undisturbed early levels of Mainamati (8th-9th centuries AD).

The archaeological remains at mainamati mainly represent the Deva period. The rule of the Devas was indeed a period of peace, prosperity, and creative excellence, and may be designated as the 'Golden Age' of Vanga-Samatata (southeast Bengal). The greatest achievement of the Devas was in the field of art and architecture.

Whatever information we have regarding the rule of this dynasty is derived almost exclusively from their epigraphic records. No less than five copperplates and one stone plaque inscription of the Deva period have been recovered from Mainamati. Only two of the copperplates have so far been deciphered and published. These are: (i) The Mainamati plate of Anandadeva with an endorsement of the grant by his son and successor Bhava Deva on the reverse; and (ii) the Calcutta Asiatic Society plate of Bhava Deva. In addition to giving the correct and confirmed genealogy of the dynasty, they have supplied information of great interest and significance regarding the Deva period not known from any other source. 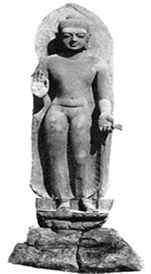 The most significant information supplied by the first record is about the newly constructed capital at Vasantapura. Apparently, the old capital had to be abandoned due to attacks of invaders. Anandadeva, the third and greatest ruler of the dynasty, issued the grant in his 39th regnal year from this new capital. Bhavadeva's grant in the same plate was issued in his 2nd regnal year from the old capital at Devaparvata. Evidently, it was regained shortly afterwards either by Anandadeva himself or by his son Bhavadeva. The lands donated in both cases were for a Viharika in the Ratnatraya establishment at 'Vendamati' (perhaps related to the modern 'Gandhamati' area of Kotbari) in the Peranatana Visaya of Devaparvata.

The records have also established an interesting parallel with the ancient Vanga Kingdom of the 6th century AD. The great-grandfather of the done of these grants was a contemporary of Samacharadeva of the family of gopachandra of Vanga.

The second, better known as Calcutta plate was originally recovered from ananda vihara, Mainamati. In addition to giving the genealogy of the Deva dynasty, it gives an elaborate description of the capital city of Devaparvata that was encircled by the sacred river Ksiroda like a moat. (This river is now identified with the Gumti in Comilla district). This record also mentions the 'Vendamati Viharika' of the Ratnatraya shrines. On palaeographic grounds the Deva copperplates have been dated to late 8th and early 9th century AD.

Coins and Sealings the recovery of more than 500 gold, silver and few copper coins from the Deva period levels in Mainamati gives an excellent idea about the flourishing economic conditions and commercial prosperity of the Deva Kingdom, but not much information about the Devas themselves. The discovery of a very large number of Arakanese type thin silver coins with 'Harikela' legend in this collection (known as harikela coins) has a great significance for the determination of the location of the long-lost Harikela Kingdom. However, the innumerable terracotta, clay and baked-clay sealings recovered from the Mainamati excavations mostly containing the Buddhist creed formula have only some palaeographic significance. This is not the case with the three-line inscription on a few terracotta sealings which have identical impressions bearing the original name of Shalvan Vihara and of its royal builder. It reads xri-Bhavadeva Maha Vihara Arya-Bhiksusangghasya (of the establishment of the great monastery built by Shri- Bhavadeva).

Architecture the three great Buddhist establishments at Shalvan Vihara, Ananda Vihara, and Bhoja Vihara, the grand stupas at Kutila Mura, and the remarkable shrines at Itakhola Mura and Rupban Mura represent Deva architecture. The Devas are especially renowned for the three great Buddhist establishments (Shalvan, Ananda and Bhoja Viharas). Strikingly similar in shape, size, and general features, these are all characterized by a citadel-like quadrangle with massive back walls and fortified single entrance, and a prominent central shrine of cruciform shape in the open courtyard.

The achievement of the Devas in architecture is undoubtedly represented by the 'cruciform Buddhist shrine' as built in the centre of these establishments. Apparently developed from the semi-cruciform shrines like those of Itakhola Mura and Rupban Mura, this unique type was not hitherto known in Buddhist architecture of India at all. The fully developed classic example of the type is at Shalvan Vihara. There is hardly any doubt now that it influenced not only Pala architecture at paharpur and Vikramashila, but also that of ancient Burma, Cambodia, Indonesia, and in fact, the whole of Southeast Asia.

Sculpture among archaeological objects, sculptural finds represent the largest single group other than pottery. Except a fine headless specimen found in situ at Itakhola Mura, no stucco sculpture has been discovered in Mainamati. Stone sculpture is also very rare. The limited number of specimens in local soft grey shale and inferior sandstone is, however, distinguished by superior style, workmanship and refinement and by a harmonious blending of physical elegance, with spiritual charm and an easy expressiveness. Among the specimens of this class, special mention must be made of a colossal sandstone Buddha discovered from Rupban Mura, that can claim to be the largest, finest, and best-preserved specimen in the whole of Eastern India. The collection of Mainamati bronzes is rich and remarkable by any standard. The vast majority of them belong to the Deva period. More than 150 excellently preserved specimens are on record.

They mainly consist of small votive images for cult worship. But large life-size images can also be found. The Mainamati bronzes primarily represent religious art. No bronze sculpture of a purely secular character has yet been noticed. Extraordinarily rich, varied and valuable, they show a perplexing variety of iconographic types and provide reliable archaeological evidence of the historic development of the Buddhist religion in the subcontinent. They reveal particularly, as nothing else does, an almost complete picture of the socio-religious life of the period, of the historic transformation of popular religion from Mahayana to Tantrik forms, and of its gradual decline in this subcontinent on the one hand, and its phenomenal rise and growth in other parts of Asia on the other.

Terracottas the terracotta art of Mainamati is almost exclusively represented by sculptured plaques found in situ on the basement walls of cruciform shrines. It is now recognised beyond any doubt that these relics belong to a single cultural period, that of the Devas, and that they represent an indigenous style of art deep-rooted in the folk art of Bengal. It evidently originated and developed in this region during this period and gradually spread over the rest of the country and in neighboring areas. Described as 'crude, light-hearted and unreflective works of art', these are greatly distinguished by their quality of great expressiveness. Its most noticeable features are its richness and variety and its vitality and dynamism. In subject matter, these bas-reliefs are overwhelming in their bewildering profusion and confusion. It includes almost everything that can be found in the life and imagination of the Bengal countryside.

The terracotta plagues together with the carved and ornamental bricks that decorate the borders of their panels constitute an attractive and distinctive school of art of the Deva period. It is in these reliefs that the personality of ancient Vanga-Samatata has found its fullest and finest expression. [M Harunur Rahsid]