Dhaka City Corporation With the birth of Pakistan in 1947, Dhaka became the capital of the new province of East Bengal. This elevation in the status of the city did not immediately alter the status of its local government, which was a municipality. The municipal government of Dhaka established in 1864 was suitable for the type of urban centre, which then it was - a small divisional headquarters. It then covered an area comprising roughly some 20.72 square kilometers with a population of some 52,000. The Dhaka Municipality created under act III of 1864 was entrusted to provide civic services to this little town and small population, which included maintenance of roads, conservancy, health services and education, and for which it was authorised to levy rates and taxes and was occasionally provided with government grants. 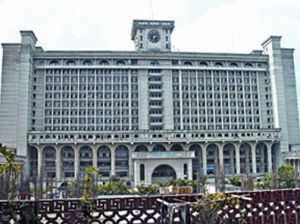 Although the city grew in stature and in population in the subsequent years, it developed dramatically only after the departure of the British in 1947 and its becoming the capital of a new province. In 1947 the city extended up to 12 square miles with a population of some 250,000. Thereafter Dhaka's political, administrative, economic, industrial, educational and even military importance grew so much that its local government was to be change to suit the new situation. However, it did not change overnight rather took a very long time in view of the prevailing political situation in the country.

After 1947 the Dhaka municipal government 'suffered from the conflicting demands of political expediency and administrative efficiency'. In view of the prevailing chaotic situations soon after the partition and the movement of population the ordinary activities of the then Dhaka Municipality suffered much and the administration could not be carried out in the old manners. Even the periodical election of the municipal commissioners and chairman and vice-chairmen could not be held because of the huge change in the electoral roll and other inconveniences. This situation lasted until 1958 when the country came under the military rule and municipal bodies along with other local bodies were suspended and senior civil servants and other local officers were entrusted with the responsibility of running the municipal bodies. Ayub Khan, the military ruler of the country, carried out so many reforms and changes in the basic structure of government and administration that the characteristics of the past system of governance was quite significantly altered. His Basic Democracies Order of 1959 substantially altered the character of both rural and urban local bodies. Within the framework of the Basic Democracies came the Municipal Administration Ordinance, 1960, replacing the Bengal Municipal Act of 1932. 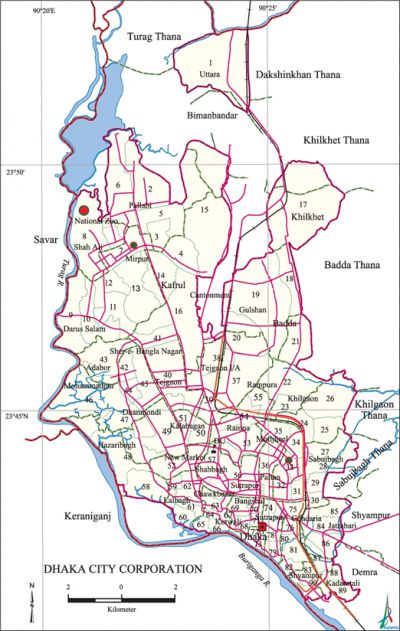 However, throughout the Pakistan period, Dhaka remained a municipality though the city expanded both in size and population and its importance grew phenomenally with the presence of the provincial head of government and the extraordinary development in many aspects of its life especially in trade and industries.

During the Bangladesh period, the urban local bodies operating as the legacy of the past were formally dissolved and official administrators were appointed to each one of them under the President's Order No.7 of 1971. Again by the President's Order No. 22 of 1973 municipalities underwent marginal changes in the composition but the functions remained more or less the same as before. In 1977 a new Paurasabha Ordinance was promulgated without substantially altering the portfolio of functions.

Under this act Dhaka also became a Paurasabha but as noted above the administrative and political importance of the place required a broader framework of local government especially for people's representation on the municipal government and for levying of taxes. Hence the demand for upgradation of the Dhaka Municipality began to come from various quarters. In 1983 thus a new form of municipal body called the City Corporation was created for Dhaka under a separate Ordinance.

By 1983 Dhaka had grown phenomenally. Its population had increased to some 3,440,147 and the area to some 400 square km. Over the years the ward divisions of the city had also greatly increased from its 1947 number of seven. It was thus overdue that the local government of the metropolis must respond to the changed situation. The 1983 Ordinance, called the Dhaka Municipal Corporation Ordinance, made the city of Dhaka a Corporation to be called the Dhaka Municipal Corporation.

The Ordinance defined that 'The Corporation shall be a body corporate, having perpetual succession and a common seal, with powers, subject to the provisions of this Ordinance and the rules, to acquire, hold, and dispose of property, both movable and immovable, and shall by the said name sue and be sued'.

The government from amongst the women of the city of Dhaka in consultation with the women organisations and social welfare institutions nominated the women commissioners. The Chairman of Rajuk, Chairman of dwasa, Chief Engineer of Public Health Engineering, Chairman of PDB, Dhaka and the DG of Health Services, GOB was made ex-officio commissioners.

Under the ordinance Dhaka City Corporation was made an autonomous body but the Government reserved the right to intervene in its affairs in several ways. Moreover, the Government appointed the Chief Executive Officer of the Corporation under such terms and conditions as might be determined by it.

Although the Ordinance raised the status of the local government, the functions and financial powers of the newly created Dhaka City Corporation remained more or less the same as under the Pourasabha system. Its functions included public health, water supply and drainage, matters related to food and drink, animals, construction and maintenance of roads, street lighting, street watering, public safety, maintenance of parks and gardens and forests, education, culture, social welfare and general development of the city. In addition, the City Corporation may perform any functions delegated to it by the government. Conversely any functions or institutions run by the Corporation may be transferred to the management or control of the government.

The Corporation was given a whole range of fund raising power including levying of rates, cesses, tolls, fees; rents and profits from corporation's own properties, contributions from individuals and grants from government. 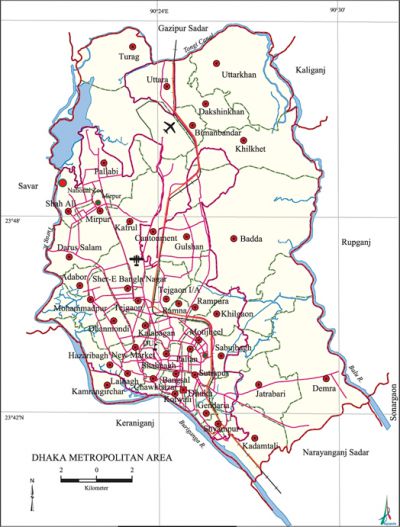 The structure of the Dhaka City Corporation as set up by the government under the 1983 Ordinance continued for some time but in 1990 the post of the Mayor was given to the Divisional Commissioner ex-officio. Later on the Government appointed a non-official as Mayor. Though the government appointed the Mayor, the Deputy Mayors were elected by the elected commissioners. In 1993 an amendment was made to the 1983 Dhaka City Corporation Act and the amended law was called 'The Dhaka City Corporation (Amendment) Act, 1993'.The major changes which it made were in the composition of the corporation authority. It was enacted that in future the Corporation would consist of a Mayor and such numbers of Commissioners as might be fixed by the Government from time to time. It was further laid down that the Mayor and the Commissioners should be elected by direct election on the basis of adult franchise in accordance with the provisions of the act and the rules made there under. It was further enacted that there should be such number of seats as might be fixed by the government exclusively for woman commissioners in the Corporation, as reserved seats, who should be elected by the Mayor and Commissioners in such manner as might be prescribed. Another important change that it made was the division of the city into several zones. It was enacted that ' For the purpose of better administration and proper conduct of business of the Corporation, the Government may, ... divide the city into such number of zones as it may deem fit'. There should be a zonal office for every zone and it would perform such functions as might be assigned to it by the Corporation under the supervision and control of the Mayor.

The first election under the new law was held in 1994 and the voters elected a Mayor and other Commissioners direct. In 1999 the provision of direct election of woman commissioners in reserved seats was introduced and the number of wards in the city were increased to ninety. None of these later laws however made any major changes in the functions of the Corporation or in its financial power.

The Dhaka City Corporation has been entrusted with great responsibility of serving a large metropolis with a population now nearing one crore or more (approximately 12 million). The city is beset with numerous problems for which it has not enough financial resources. But more importantly many of its traditional functions have been taken over by different government agencies. As there seems to be little coordination among these agencies the city's civic services suffer much for which the City Corporation perhaps gets undue criticism.