Dighalia Upazila (khulna district) area 77.17 sq km, located in between 22°50' and 22°59' north latitudes and in between 89°33' and 89°40' east longitudes. It is bounded by abhaynagar and kalia upazilas on the north, khalishpur thana and rupsa upazila on the south, terokhada upazila on the east, daulatpur and khan jahan ali thanas and Abhaynagar upazila on the west.

Administration Dighalia Thana was turned into an upazila on 12 January 1987. 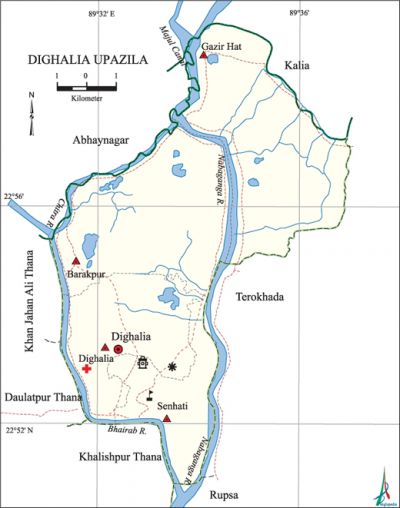 History of the War of Liberation During the war of liberation in 1971 the Pak army conducted heavy genocide, plundering and also set many houses on fire in the upazila. A number of freedom fighters of the upazila were killed in direct encounters with the Pak army.

Hats, bazars and fairs Hats and bazars are 16, most noted of which are Senhati, Batibhita, Lakhahati bazars and Kolar Hat, Gazir Hat, Majhirganti Hat and Kali Puja, Baishakhi and Eid melas.