Duck web-footed aquatic birds of the family Anatidae under the order Anseriformes. 'Duck' is the common name for female members of the family; drake for the male duck and duckling for the chick. Many duck species are migratory, but some are resident. In addition to all three toes being linked by web, all ducks have flat, spatula-like bills that are provided with lamellate comb-like edges for straining food from the water. Ducks have relatively long necks and chubby but streamlined bodies usually with long and pointed wings suitable for sustained flight; their necks and legs are much shorter than those of the goose and swan. All ducks lay unspotted eggs and ducklings are hatched with down feathers or are nidifugous. Nests are always lined with down feathers plucked by the females from her breast. The birds moult their flight feathers of the wings at the same time. Therefore, they do not fly for a period lasting up to a month following the breeding season. Ducks are broadly subdivided into two groups: Dabbling Ducks and Diving Ducks. In addition, there are the Shelducks. 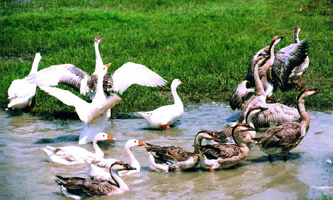 Dabbling Ducks are surface feeders and are primarily vegetarian; they do not prefer to dive but can do so when young or are unable to fly; their flight is swift and direct. Almost all have a wing-speculum that is quite an opalescent colour patch.

Females are usually brown but males are quite colourful, especially during the breeding season. Drakes pass through an eclipse stage when their appearance might look similar to the ducks. Their hind-toe is narrow and not lobed. When feeding from the surface of water Dabbling Duck not only skims the surface but also inserts its head, neck and upper breast into the water in an 'up-ending' position, almost at an angle of 90 degrees. Thus it can collect food, such as seeds, tubers, worms and molluscs from the mud bottom in shallow water zone of lakes, marshes, ponds and estuaries.

All species under the genus Anas are Diving Ducks. Bangladesh has nearly a dozen species under this genus and all but one are migratory. Common among these are the Mallard (Nilshir), Anas platyrhynchos; Pintail (Lenja), Anas acuta; Shoveller (Pantamukhi or Khuntey Hans), Anas clypeata; Garganey or Blue-winged Teal (Giria Hans), Anas querquedula; Gadwall (Piong Hans), Anas strepera and Wigeon (LalIir), Anas penelope. Our domesticated ducks have come from the Mallard.

The Spotbill Duck (Pati Hans), Anas poecilorhyncha is a resident bird in Bangladesh; it looks like the female of the domesticated duck and has a yellow bill-tip and two red spots by the base of the upper mandible. Other resident ducks include the Cotton Teal (Beley or Bali Hans), Nettapus coromandelianus. Lesser Whistling Teal (Chota Sharali), Dendrocygna javanica and Large Whistling Teal (Bara Sharali), Dendrocygna bicolor. All three types build nests on tree hollows and hence they are also called 'tree ducks'. Beley Hans used to be once present all over the country. There are two other large resident ducks: Comb Duck (Nakta or Buncha Hans) Sarkidiornis melanotos and White-winged Wood Duck (Badi Hans), Cairina scutulata. The former is uncommon and lives in charland or sandbars of the padma and jamuna rivers. A few pairs of the latter might still be present in the Kassalong Valley Reserve Forest in the Rangamati hill districts; they can swim under water to pursue fish; they build nests on the trees like Civet, Uri Am and China Koroi. The White-winged Wood Duck is a critically endangered species in Bangladesh.

The hind toe of the diving duck is broadly lobed and is suitable for smooth and rapid paddling; it collects food by diving and swimming underwater; it feeds mostly on fish, shrimps and aquatic insects and worms. Drakes and ducks have different call-notes; drakes have a dark plumage. All Pochards Aythya species are diving ducks. There are 6 species of Pochards in Bangladesh. The common ones are: Tufted Pochard or Tufted Duck (Bamunia Hansh), Aythya fuligula; White-eyed Pochard or Ferruginous Duck (Ranamuri or Bhuti Hans), Aythya nyroca and Common Pochard (Sadharan Bhunti Hans), Aythya ferina. Others in the group are Baer's Pochard (Bara Bhunti Hans), Aythya baeri and Scaup Duck (Shop Hans), Aythya marila. There has only been a handful sightings of Baer's Pochard from the country. The rest of the species are widely distributed throughout the estuaries of the south and the beels in the northeast. Redcrested Pochard (Ranamuri), Netta rufina is both a diver and dabbler. It is quite common in haors and large beels.

Comb Duck (Buncha Hans) a critically endangered large duck, Sarkidiornis melanotos, also known as Nakta, of the family Anatidae, order Anseriformes. It has a fleshy knob, or comb, on the base of its bill at the forehead of males. The comb swells visibly during the breeding season. Upperparts are bluish black. The lower back is grey. 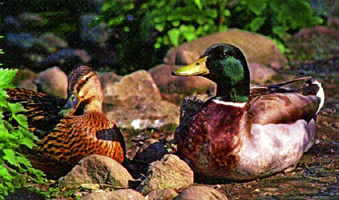 Head and neck are white, and speckled black. Wing speculum (secondaries) is bronze. A black half-collar can be seen on the breast. The female is duller in colour and smaller. In length it is about 76 cm.

A strong flier and good walker and diver; it perches freely on trees during the day; keeps in family parties of 4 to 10, and occasionally of 25 to 30. It is chiefly vegetarian; its food consists of grain, shoots, seeds of aquatic plants and rice; frogs and aquatic insects are also occasionally taken. The drake emits a low grating croak and a loud honk in the breeding season. It nests in a natural hollow of tree trunk at a moderate height in trees close to water; those are unlined or have lining of sticks, grasses dry leaves and feathers. Nesting season is July-September. Clutch size is 7 to 15. It is found in large wetlands, mostly in the NE. Hunting, trapping and habitat loss are the major threats to its survival. It is also found in Pakistan, India, Nepal, Myanmar, China (southeastern part), and in some countries in Africa.

White-winged Duck (Bhadi Hans) a critically endangered duck (Cairina scutulata), of the family Dendrocygnidae (previously under family Anatidae), order Anseriformes, with glistening blackish plumage above and rich chestnut brown below; its head and neck is white and speckled black. A large white patch is present on the shoulder. The white wing patch and dark underparts distinguish it from the Comb Duck of about the same size. 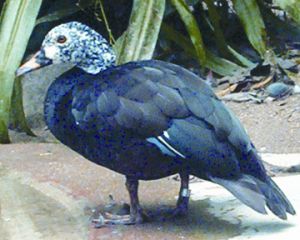 Body length is 66-81 cm; the female is smaller than the male. It lives in pairs or in small parties of 5 or 6; perches on trees. It takes refuge on a secluded forest pool during the day, flights are at dusk when it moves to feed in wetlands.

Feeding habit in the wild is not known; in captivity they are omnivorous with a preference for animal food. It nests in tree hollows sometimes with scanty lining of sticks, grass and leaves. Clutch size is 7-10, incubation period about 30 days. It lives in moist mixed evergreen forests, with stagnant or slow moving waters such as the Kassalong Reserve Forest in the Chittagong Hill Tracts in the SE. Habitat loss and hunting are the major threats to its survival. The species is also found in India, Myanmar, China, Thailand, Vietnam, Laos, Kampuchea, Malaysia and Indonesia. [Md Anwarul Islam]