Ecopark a short form of Ecological Park. It is exploited as an amusement park without hampering its natural environment so that the bio-diversity remains unaffected there. Generally a particular area of a forest is demarcated and brought under intensive management for this purpose. Sometimes forest areas having special natural features are selected as ecoparks. Flora of the concerned area gets preference for such consideration. However protection and preservation of both flora and fauna get top priority. Beauty offered by the nature is opened to the visitors. Moreover, efforts to attract and entertain the visitors are also visible in the ecoparks.

Ecopark is not only a mere component of forest management. It facilitates to enjoy the beauty of the jungles as well as to acquire first hand knowledge on its ecology, particularly the growth and development of flora and fauna. Ecopark also helps to increase public awareness about the necessity of maintaining bio-diversity. The Department of forest has set up nine ecoparks throughout Bangladesh considering their natural beauty and specific features like geographical location. These are: Sitakunda Botanical Garden and Ecopark, Bashkhali Ecopark, Madhavkundo Ecopark, Madhutila Ecopark, Bangabandhu Jamuna Ecopark, Kuakata Ecopark, Tilagarh Ecopark, Jafflong Garden Park and Barshijora Ecopark.

Sitakunda Botanical Garden and Ecopark located in the evergreen Chandranath reserve forest range in Sitakunda upazila of Chittagong district. It is the oldest ecopark of Bangladesh. It was set up on 808 hectares of land in 1999. The historic Chandranath Shiva Temple, a sacred shrine of Hindu religion is located on the top of the Chandranath Hill having 410-metre height. Several other hills and hillocks along with fountains have added splendid beauty to the Botanical garden and Ecopark. The Chandranath temple is 5 kilometre away from the main gate of the park and the pilgrims have to reach the temple stepping over 1600 stairs. Sitakunda Ecopark has 154 species of flora including fruit bearing trees, timber and medicinal plants.

The park is specially significant for having a rare plant- Cycus. There is an observation tower, a picnic spot, an orchid house, a cactus house, a rose garden, and an orchard of seasonal fruits in the park. There is a guesthouse and a large pond full of water lily. Various species of wild animals and birds are there to attract visitors. Sitakunda Ecopark 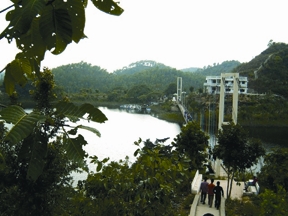 Banshkhali Ecopark was established on one thousand hectres of forest in 2003. The park is located in the Jaldi Sanctuary range of Bamercharra and Danercharra area under Banshkhali upazila of Chittagong district, 50 kilometre south-west of the port city. The topography of the park is hilly and it was a natural forest full of timber and a rich wildlife sanctuary. The park comprises of a newly created garden of 674 hectres and an artificial lake. There are some establishments for visitors, like a two-storied guesthouse, a picnic shade, hilltop cottages, a panaromic view tower, a hanging bridge, a refreshment corner, visitors shade, parking lot and paddleboats, speedboats, and floating fishing platforms on the lake. Free movement of wild animals including bears, elephants, dear and pythons are frequent in the park. 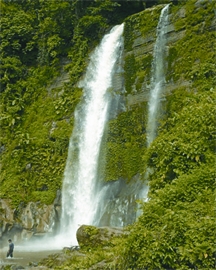 Madhabkunda Ecopark  was established in 2001 at the western side of the Patharia Hills Reserve forest comprising an area of about 500 acres. It is located 70 km north of Moulavibazar district and 8 km east of Kathaltali bazar of Barolekha Upazila. The beautiful Madhabchara flows by the side of the park. the largest hilly waterfall in Bangladesh, Madhabkunda  and Pirkunda is also there.

Besides many large and small hillocks characterize the area. Among those ‘Nagini Tila’ is well known. Shegun, Garjan, Chapalish and many other species of flora along with attractive faunas are found in the park. There are footrails, towers, picnic spot and restaurant in the park. 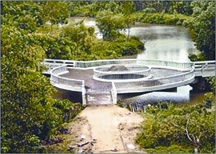 Madhutila Ecopark  was set up on 380 acres of forest in Madhutila range under Nalitabari Upazila of Sherpur district in 1999 located around the foot of the Garo hills along the Indo-Bangladesh border. This ecopark is comprised of deep green forest, hills, fountains, lake and hillocks. It is also enriched with local varieties of timber as well as fruit bearing and medicinal plants. A mini zoo, an information centre, canteen, watch tower, sculptures of wild animals, a rest house, a rose garden and a mini children park has increased the attraction of the ecopark to the tourists. Madhutila Ecopark

There are facilities of cruise in the lake. The visitors can easily watch the free movements of birds and wild animals.

Bangabandhu Jamuna Ecopark  was established on 124 acres of land along the west bank side of the Jamuna/Bangbandhu bridge in 2007. After the completion of the bridge in 1998 the department of forest took over the area for social afforestation programme here to beautify the site. Many species of flora and fauna can be seen there. Madhabkunda Ecopark

Kuakata Ecopark was developed in 2005 on a vast land of 13.984 acres of Kalapara Upazila of Patuakhali district and Amtali Upazila of Barguna district. The ecopark includes the Kuakata sea beach, a portion of the bay of bengal having the confluences of Ramnabad, Andharmanik, Payra and Bishkhali Rivers. Mangrove forest and local varities of timber, palm, and fruit bearing trees are there beside the common species of wild animals and birds. The park has a parking lot, a picnic shade, along with kitchen and toilet facilities.

Tilagarh Ecopark is situated in a reserve forest near Sylhet Agricultural University and Sylhet Engeneering College; 8 km east of Sylhet headquarter. It was established in 2006 on 112 acres of forest. A fountain flows across the park having a number of small and big hillocks. It has many naturally grown trees and fruit bearing plants including canes. It has also a few varieties of common species of fauna. There is a rest house, a picnic corner and a children corner in the park.

Jafflong Green Park was set up in Choilakhal reserve forest under Goainghat upazila of Sylhet district in 2008. The 537-area ecopark have strip gardens on the both sides of Sylhet-Tamabil Highway, many species of naturally grown shrub are available there. In the winter a huge number of migratory birds take shelter there. All the common species of fauna are also seen. Various infrastructures are being built here to attract more tourists.

Borshijora Ecopark was established on 887 acres of reserve forest near Maulavibazar town in 2006. The forest was declared reserve in 1916. Many timber and medicinal plants were planted there later. Two eco-cottages, four picnic spots, two observation towers, security posts, five public toilets and power supply line are there. The ecopark also has many common species of fauna. [Md Mojaharul Islam]