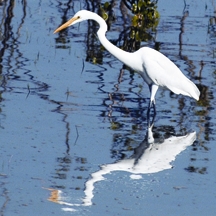 Long, delicate, and ornamental nuptial plumes, called aigrettes (the term egret has been originated from this word) appear on the back of these birds during the breeding season. These aigrettes are used as ornaments in oriental ceremonial dress and were formerly used in women’s hat. There are eight species of egrets worldwide; Bangladesh has five (table).

NB: Previous names are given in square brackets.