Elias, Akhteruzzaman (1943-1997) novelist, short story writer, was born on 12 February 1943 at his maternal uncle's home in the village of Gotia in Gaibandha District. His paternal home was in Chelopara, near bogra. His father, Badiuzzaman Muhammad Elias, was a member of the East Bengal Provincial Assembly (1947-1953) and Parliamentary Secretary of the muslim league. 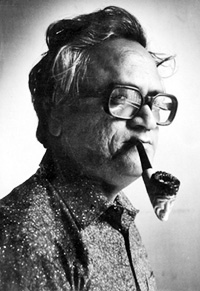 Akhteruzzaman completed his Matriculation from Bogra Zila School (1958), Intermediate from Dhaka College (1960), and BA (Hons) and MA from the University of Dhaka (1964). He began his career as a lecturer at jagannath college and continued teaching there till 1983. Subsequently he also worked as Deputy Director, Directorate of Primary Education, Vice-Principal of Music College, and Professor and Head of the Department of Bangla at Dhaka College. He was also a member of the Mofizuddin Education Commission.

Though not a voluminious writer, with only two novels and twenty-two short stories to his credit, Akhteruzzaman is considered as one of the foremost fiction writers of Bangladesh. His two novels are Chilekothar Sepai (1987) and Khoyabnama (1996), while his short stories have been anthologized in Anyaghare Anyasvar (1976), Khonyari (1982), Dudhbhate Utpat (1985), Dojakher Om (1989). He also has a collection of 22 essays, Sangskrtir Bhaba Setu (1997), published posthumously. Elias' insight into the subtle nuances of human nature, his use of physical and psychological details, his keen sense of wit and humour, his sarcasm at hypocrisy, his critical knowledge of history and politics and its objective, aesthetic articulation in the novels and short stories have earned for him an eminent stature in bangla literature.