Enclaves are small and scattered pieces of landmass belonging to one country located in or surrounded by another. The Indo-Bangladesh enclaves are also known as chitmahals. The problem of enclaves belonging to India and Bangladesh is the historical and geographical result of the partition of bengal. In 1947, a Boundary Commission, headed by sir cyril radcliffe, was appointed according to the mountbatten Plan of 3 June 1947, to divide Bengal and the Punjab between India and Pakistan. The Mountbatten timetable for independence was a crash programme and required that the boundary demarcation should be carried out 'with the greatest speed'. In fact, it was completed in six weeks. Sir Cyril Radcliffe arrived in Delhi from London on 8 July and submitted his report on 13 August. The awards for both the Punjab and Bengal with the boundaries drawn on a 'topo-sheet' were made public on 16 August as a masterpiece of division of territory between two sovereign countries. In fact, the commission made at pleasure cutting 'across thickly populated and long-settled areas, each of which formed an integrated economy and system of communication. Injustice and great hardship could not be avoided, and the awards themselves were sure to be unpopular and to become the subject of controversy'.

Because of the whimsical execution of the award, enclaves on both sides of the border exist as unresolvable problems even today. In a situation of inactivity of the members of the commission, zamindars, nawabs, local leaders, and even owners of tea estates of both Hindu and Muslim communities are said to have influenced working out of the award in Bengal in their own interests with fair and foul means. Bangladesh has thus inherited the enclave problem created by the British during partition in 1947. 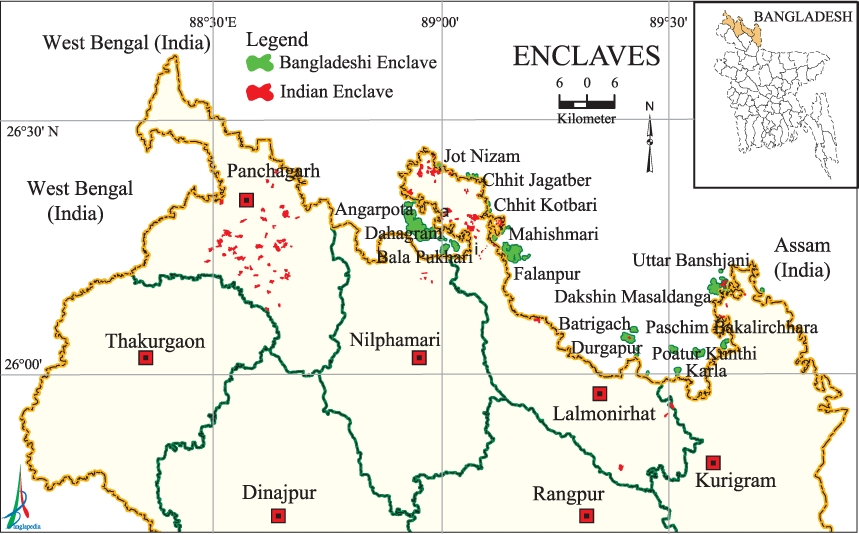 There is dearth of information about the enclaves of Bangladesh in India and those of India in Bangladesh. Available sources indicate that along the northwestern boundary there are at least 192 enclaves and 119 enclaves inside India are claimed by Bangladesh while 73 enclaves inside Bangladesh are claimed by India. An account of 75 enclaves in northwestern Bangladesh which are inside India and identified as parts of Bangladesh suggest that 41 of them are in lalmonirhat (2 in hatibandha upazila, 1 in Lalmonirhat Sadar, 4 in kaliganj, 3 in aditmari, 28 in patgram, and 3 in phulbari), 16 in kurigram district (all in bhurungamari upazila) and 18 in panchagarh district (2 in Panchagarh Sadar upazila, 12 in boda and 4 in debiganj).

Bangladesh has virtually no administrative control over many of its small enclaves, which measure less than an acre. Because of this, Bangladesh is not in a position to undertake development activities there or to ensure normal civic life for those people who live there, although, under the Constitution, they are entitled to enjoy the rights and privileges of Bangladesh citizenship.

Within a year of Partition of Bengal (1947), the enclave issue began to surface and posed potential political and communal tensions between India and Pakistan. To tackle the situation, Prime Minister Jawaharlal Nehru of India, and Prime Minister Firoz Khan Noon of Pakistan initiated a process in 1952 aiming to 'exchange the enclaves between the two countries'. But when a part of southern Berubari (7.39 sq km), an East Bengal enclave adjacent to the Boda thana of Panchagarh district, was about to be handed over to East Bengal, opposition in India against the decision was so strong that it was decided 'to retain the piece of land by India, but in exchange for a stretch of an acre of land called 'Tin Bigha' to link Angarpota-Dahagram enclave under Patgram thana of the Nilphamari district with mainland East Bengal'. This decision was not implemented for more than two decades because of legal wrangles on the Indian side.

The independence of Bangladesh in 1971 created some optimism about resolution of issues relating to the enclaves and other outstanding boundary disputes. In the agreement signed on 16 May 1974 by Indira Gandhi and sheikh mujibur rahman, Prime Ministers of India and Bangladesh, it was decided to put into effect the demarcation of boundaries at selected stretches. Section 14 of the agreement was about handing over of the southern part of South Berubari to India in exchange of a passage in perpetuity linking Angarpota-Dahagram with Patgram in Bangladesh. The Bangladesh government ratified the agreement forthwith and handed over the relevant part of South Berubari to India in 1974. But the handing over of the Tin-Bigha corridor, measuring only 178 × 85 metres, was delayed due to long constitutional and legal debates in India. This continued till 7 October 1982, when another agreement was signed. In the new agreement the exchange status in perpetuity in handing over Tin-Bigha was compromised with residual jurisdiction vested upon India, resulting in an unclear arrangement of limited access to the corridor by citizens of Bangladesh for movement between the mainland and the enclave. However, it took another decade for the agreement to materialise because of local opposition and legal action taken against the arrangement on the Indian side. Once these hurdles were settled, the governments of two countries had to sign another protocol on 26 March 1992 relating to security, control, and use of the corridor for movement of people and vehicular traffic between the enclave and the mainland of Bangladesh. The control of the passage rested almost fully with Indian authorities. Finally, the Tin-Bigha corridor was opened for the people of Bangladesh for their limited movement in 2011. In September 2011, the Prime Ministers of the two countries signed an accord on border demarcation and exchange of adversely held enclaves. Under this agreement, the enclave residents may continue residing at their present location or move to the country of their choice. But Problems related to other enclaves still remained unresolved. [K Moudud Elahi]