Normal fault a fault in which the hanging wall is on the downthrow side (Figure 1). Normal faults are sometimes referred to as tension or gravity faults. The subdivision of the crust into blocks by normal fault is block faulting. A series of parallel faults throw in the same direction gives step faulting. In Bangladesh bogra fault is a normal fault which has been active at different times and located in the Western Foreland Shelf. Movements along the Bogra fault led to the deposition of a huge sedimentary pile within the bogra graben.

Seismic sections and particularly the results of biostratigraphic investigations on samples from Bogra-x1 and Kuchma-x1 wells provide evidence of the rejuvenation of the Bogra fault in Palaeogene and Neogene times. The down thrusted block, ie the Bogra Graben shows thicker development of the Sylhet limestone than the uplifted segment. This implies vertical movements along the fault and subsidence within the Bogra Graben during deposition of the Sylhet limestone. The Bogra fault was active during Middle and Upper Miocene times as indicated by the increased thickness of Upper Miocene deposits within the Bogra Graben.

On the other hand, along the southern edge of the Shillong Plateau an E-W striking Dauki Fault Zone (Figures 3) with block faulted Palaeogene sediments of the Northern Foreland Shelf and block faulted Piedmont deposits of Plio-Pleistocene age in the Susang Hills of the Greater Mymensingh district can be considered as a structural unit of regional importance from E-W. The so-called Hinge Zone, a zone of deep seated normal faults in the basement complex is conventionally thought of as representing the dividing line between the Indian Platform with full thickness of continental crust and the Bengal Foredeep. The Hinge Zone is characterised by a series of step faults across its length. This zone is seismically active and the hypocentres of earthquake possibly originating with this zone have depth ranges from 71 km to 150 km. 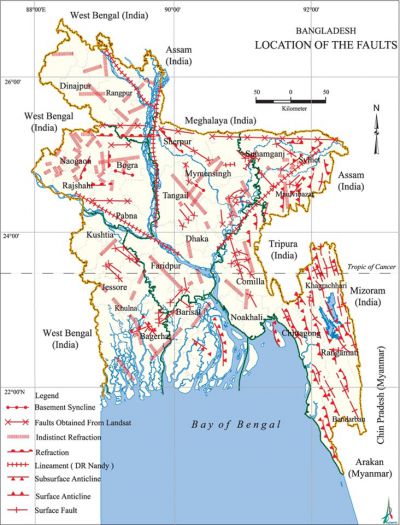 Reverse Fault/Thrust Fault is one in which the hanging wall moves upward in relation to the footwall. It is a common type of fault in all the thrust fold belts of the world. In Bangladesh, thrust faults are commonly associated with the anticlinal folds of the eastern fold belts. In fact the eastern fold belt of the Chittagong-Tripura or the frontal fold belt of the Indo-Burman range, as it is also called, is a fold thrust belt owing its origin to the subduction of the Indian plate beneath the Burmese plate. The major anticlines of the fold thrust belts are accompanied by the thrust faults either in one limb or on both the limbs. The thrust faults are east dipping. For example, most of the major anticlines of the Chittagong fold belts ie Sitapahar anticline, Sitakund anticline, Bandarban anticline, Gobamura anticline, Matamuhuri anticline, Dakhin Nhila anticline, Uthanchatra anticline have major east dipping thrust faults on the western limb while some of them also have thrust fault (west dipping) in the eastern limb. The intensity of the thrust faults increases to the east and decreases towards the west. In the western part of the fold belt, the intensity of folding is decreased and the folds are not associated with major thrust fault. Where the fold belt merges with the foredeep further west, the anticlines are simple, gentle and are not faulted.

The thrust faults are oriented along NW-SE direction conforming to the strike of the anticlines. There are some cross faults also within the fold belts which cut across the anticlines as shown by satellite images and also as evidenced from sudden straightening of river courses.

The thrust faults have significant effect on the topography and disposition of stratigraphic units in the Chittagong fold belts. Major escarpments ie-steep reliefs on the west side of the anticlines are the results of thrust faults. These also bring the very young formation in juxtaposition to old formation ie Tipam formation is juxtaposed against Bhuban Formation for example. 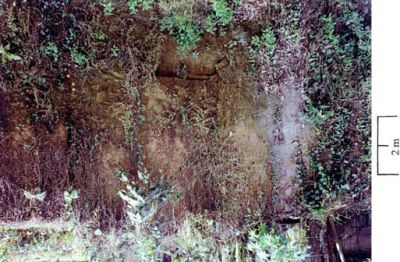 Fig. 2: Fault scar along the southern edge of the isolated/Antiform Madhupur Tract. The throw is measured 9m towards Brahmaputra-Jamuna floodplain

Strike-slip Fault are those along which the displacement is chiefly parallel to the strike of the fault. Most of them are steep and straight; crushing of the rocks in the vicinity is characteristics and the larger faults of this type are usually fault zones. If, as an observer faces a strike slip fault, the displacement of the block on the other side is to the right, then the fault is a right-lateral or dextral fault, and if it is to the left, then it is left lateral or sinistral fault (Figure 1). Tear Fault is a fault in which the movement is dominantly strike-slip (ie horizontal). The terms dextral and sinistral are applied to tear faults to describe the apparent direction of movement. Kaladan fault covers a distance of almost 270-km marked the eastern boundary of the Mizoram-Tripura-Chittagong folded belt. The fault trends north-east-south-west along the Kaladan River of Arakan coast. On the basis of faulting nature and pattern it is termed as a dextral transformed fault.

En-echelon Fault sometimes gravity faults show an en echelon pattern where individual faults strike at an angle of approximately 45 degrees to the trend of the faulted belt as a whole. The fresh en-echelon fault scarps along the most western edges of the madhupur tract bear geomorphic characteristics of recent tectonism. Moreover, the seismicity in (one epicenter adjacent to Futgani-Turag structural valley) and around the Madhupur Tract block suggests that the movements along the boundary faults responsible for the uplift of the block are still active.

The most remarkable features of the Shillong Plateau is the E-W running Dauki fault which marks the southern margin of the plateau. This fault zone forms a sharp escarpment along the southern edge of the plateau. The steep escarpment indicates vertical displacement along the Dauki Fault Zone where the Bangladesh plains subside actively. Though the Dauki Fault Zone is shown as a single fault line on the geological map of Bangladesh (1990) but the images show that it is the combination of a number of en-echelon faults trending NW-SE, NE-SW and N-S, hence the fault scraps are zigzag rather than a straight line.

Fig. 3: Window 1 shows southward curvature of the fold axes, which indicates the pushing of Shillong Plateau from noth to south. In Windows2. fold axis is E-W which also implies north-south compressional force is responsible for the formation of these Plio-Pleistocene folds

Growth Fault are particularly common in areas of high sedimentation rate and are generally associated with thick deltaic successins. Growth faults are relatively small about 15 km to 20 km wide and 45 km to 50 km long. They are important for oil and gas exploration and development. In Bangladesh offshore seismic survey from swatch of no ground indicates possible slump deposition on the delta front which could be associated with growth faults. Recently, BAPEX reported onshore growth faults from the subsurface of Haluaghat upazila, Mymensingh district.

Major Tectonic Elements the major tectonic elements Bangladesh, which is an integral part of Cretaceous to Holocene Bengal Basin being situated at the juncture of the Indian and Burmese plate is one of the tectonically most active areas of the world. Tectonically, the Bengal Basin is subdivided into two principal units: (1) the western and northwestern gentle sloping stable shelf on the Indian Craton and (2) the deep basinal area- the Bengal Foredeep- to the east and the southeast. The Hinge Zone demarcates the two structural provinces.

From the western margin of the Basin the basement dips gently southeastwards to form the broad western foreland shelf of the basin. It goes to a depth of more than 10 km along the Hinge Zone under an increasing thickness of the sedimentary column. On the north, the E-W Rangpur Saddle represents a shallow basement ridge. This ridge at a maximum depth of 150 m from the surface near Madhyapara of Rangpur district is the subsurface continuation of the Indian Shield eastwards into the Shillong Plateau.

The elongated NE-SW Barisal-Chandpur Gravity High is a basement controlled fault zone probably represents through the Swatch of no Ground the north-easterly extension of the continental-margin-flexures of the east coast of India, which have resulted in the initial breakup of the Gondwanaland. Landsat images identified a zone of weakness that coincides with the Barisal-Chandpur Gravity High trend (positive magnetic anomalies which indicates the shallowing of the basement along this trend).

Geophysical evidence shows that southward of the Shillong Plateau consists of a monoclinal structure and plunges into the Bengal plains forming the northern foreland shelf of the Basin. The southward extension of this northern foreland shelf is delineated by the prominent E-W Dauki Fault System (5-6 km width). The northeastern part of the Bengal Basin has been experiencing strong seismicity which is believed to be caused by the Dauki Fault System bounding the southern part of the Plateau. It appears that all the four margins of the Shillong Plateau are characterised by strong seismicity.

The Bengal Foredeep is a low gravity feature located between the Hinge Zone on the west and the Barisal-Chandpur Gravity High in the east. It extends from south of the Shillong Plateau to the Bay of Bengal and two troughs are situated in this foredeep namely, the Sylhet Trough on the northeast and the Faridpur Trough on the northwest and the Madhupur High separates the two.

The Main Boundary thrust Fault (MBT) initiated in late Miocene or Pliocene time is regarded as the present thrust front of the Himalayas and forms the northern margin of the Himalayan foredeep. The MBT is seismically very active. The Himalayan foredeep more frequently experiences moderate to high magnitude shocks. The MBT zone shows the presence of the entire disasterous Himalayan earthquake (M>8.0). In the eastern Himalayas the highest concentration of seismic activity is in the region of the Assam Syntaxial Bend.

The Bengal Basin is bounded on the east by the western fold belt of the Indo-Burma ranges. The northern and the central portion of this foldbelt are seismically active. The earthquakes in this foldbelt seem to have a correlation with strike-slip transverse faults at shallow depth. A major event (M=7.5, 1762) southeast of Chittagong might have been associated with one of these faults.

Earlier it was mentioned that only the northern part of the Indo-Burma ranges show the evidence of collisions between the Indian and Burmese landmasses, while active oceanic subduction is presently occurring in the south. In a framework of continued oblique subduction the collision suture will gradually advance towards the south pushing the orogenic belt and likewise associated seismicity westward. This would imply that the future will witness reactivation of many concealed faults of the Bengal Basin causing strong seismicity in its present low seismic western part. [Sifatul Quader Chowdhury]