Fishing Craft specialized boat, ship or other vessel used for fishing. In freshwaters, estuaries and offshore areas of the bay of bengal commonly used crafts are of various types, sizes, and designs.

Dinginauka Small boats with round bottom. The fore and the hind part of the boat are high above the water level. The stem and the bow are long and pointed. In smaller boats there are no deck but the bigger ones usually possess one. The hood is usually lacking, but when present, is located in the posterior part of the boat. The oars are long and paddle-like. The sail is not carried by most dingis but if present it is made of comparatively thin cloth and is supported by bamboo poles attached diagonally. Fishing dingis are also called Jalia dingis. The dingis are named on the basis of the fishing nets operated by them; for instance, Bhesail Dingi, Patam Dingi, Shangla Dingi, and Talal Dingi. 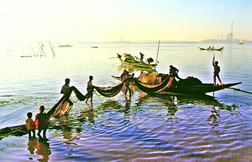 Chandinauka A traditional fishing boat. The ends are slightly pointed the length varies from 8-12m, beam from 1-3m, and the depth from 75-125 cm. The bottom of the boat is either flat or round. The stem is between 40 and 150 cm. A steering paddle similar to that of an ordinary oar is fixed at the rear of the boat. The hood is situated in the central part of the boat. The sail is often absent but when present is rectangular or square-shaped and placed at the front. The boat is extensively used for Hilsa fishing.

Koshanauka Anterior and posterior ends are blunt, 7-10 m in length and has a flat bottom. Its oars are made of bamboo poles; the deck is made of whole or split bamboo pieces. A hood is never provided. A triangular sail, when present, is situated in the anterior half of the boat. The boat is used for fishing in shallow waters. Fishing by country boats

Shampan Seen mainly in Chittagong and other coastal districts of Bangladesh. The posterior part is divided into two pointed parts; the bow is pointed and raised above the water. It is used mainly in ferry-crossing of rivers in coastal regions and sometimes for fishing in the estuaries or in the offshore waters of the Bay of Bengal.

Rafts used in almost all the districts of Bangladesh for fishing in shallow waters, they have various local names viz, Bhela, Bhera, Chali, Bhura, etc. Rafts are prepared mainly by fastening together trunks of banana trees. A raft can be 2-3 m in length and 1-1.5 m in width. Clasp nets (Khepla Jal) and Drag nets (Moya Jal) are operated by rafts. 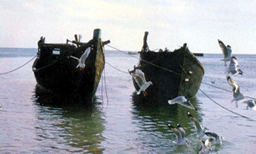 There are also fishing vessels specifically designed and constructed for fishing in the sea. Until the middle of the 20th century, fishing boats were largely based on local designs. Presently, the construction of fishing boat is an international industry and differences in vessel types have more to do with the fishing methods for which they are employed rather than the port of their origin. In modern fishing boat construction, steel is the most material commonly used, although fibreglass and ferrocement are increasingly being used in making boats too. The principal considerations given to the development of fishing boat construction are higher catching power, smaller crews, and reduced operational costs. The Food and Agriculture Organisation has introduced the following classifications of fishing vessels on the basis of the gear used:

Trawler Vessels with powerful engines and machinery for dragging the trawl nets. Trawlers can be of different types based on the way in which the nets are dragged.

Side trawler Through these trawlers the trawls are launched and pulled at the side of the vessels.

Stern trawler Almost all modern trawlers are of stern types where the trawls are launched and recovered over the stern.

Beam trawler In this type two beam trawls are towed from boom extending to each side and supported by a central mast.

Wet-fish trawler is characterized by the way fish are caught and stored in vessels.

Freezer trawler have freezing facilities; fishes are stored in their freezing chambers when they are at sea for a week or longer.

In Bangladesh sea-going fishing crafts are mainly owned and managed by the Bangladesh Fisheries Development Corporation (BFDC). The corporation has been engaged in fishing in the Bay of Bengal since 1972. It has about 15 medium-sized stern trawlers. The other sea going vessels are boats of different sizes. The majority of the boats are made of wood. The gears used by the fishermen are seine and set bag nets of different sizes. [MS Shah]