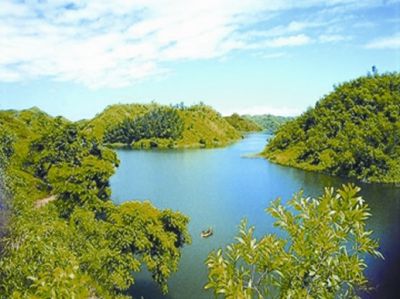 Foy's Lake artificial lake constructed by the assam-bengal railway in 1924 near Khulshi not far from the Pahartali Railway Station in chittagong. This lake is fairly big in size and was created by erecting an embankment across a narrow valley from one hill top to the other. Geologically, these hills are composed of dupi tila formation.

There is another artificial lake close to the south of the Pahartali Railway Station, which was excavated by the same railway authority in 1920. Both the lakes are tourist spots of Chittagong City and are regularly visited by local and foreign tourists.

In order to attract more tourist, a mini-zoo has been set up at the entrance of the Foy's Lake. Both the lakes are intended to serve as reservoirs for drinking water to the extensive railway areas of Chittagong. [Sifatul Quader Chowdhury]