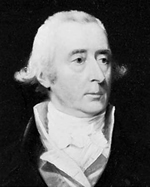 Francis, Sir Philip (1740-1818) one of the four members of the Governor General and Council of the Fort William in Bengal formed under the regulating Act, 1773, a malicious opponent to warren hastings, originator of the idea of permanent settlement plan for Bengal, British parliamentarian and friend of Edmund Burke, Fox and Sheridan, and the man behind the protracted parliamentary trial of Warren Hastings.

Born in Dublin on 22 October 1740, Philip Francis entered St. Paul's School, London, where he acquired proficiency in classical study. In 1761, he became intimate with Prime Minister William Pitt the Elder who employed him as his private emissary with important missions. Francis was suspected by his contemporaries to be the author of the notoriously famed author of the anonymous

Letters of Junius to the Public Advertiser from 1769 to 1772, which exposed the drawbacks of the contemporary celebreties most mercilessly. Computer aided analysis of the language of the Letters of Junius with the signed works of Francis now shows that he was really the author of the Letters of Junius.His close acquaintance with Prime Minister Pitt the Elder earned him the highly lucrative position of a member of the ‘Governor General and Council at the fort william in Bengal’ just established under the Regulating Act of 1773.

Under the Act Warren Hastings was appointed the Governor General and four others including Philip Francis were appointed as Council members, who together made the supreme government of the Fort William in Bengal. Soon Philip Francis developed differences of opinion with the Governor General on the question of the modes of administration and other policies, and even on personal grounds. In the four members Council, Francis was supported by two members, Monson and Clavering, and the Hastings by only one, Barwell. Their acrimonious relations reached such a level that at one point took place a duel with pistol between them in the open field. In the duel, Francis received a dangerous wound and soon left Bengal for England in 1781.

In 1784 Francis was elected a member of the House of Commons from Isle of Wight. He applied all his power to bring Warren Hastings down from the position of governor generalship and get the position for himself. On his return to England after his return from Bengal, Philip Francis, then Member of Parliament, formed a cable to impeach Hastings in parliament for his 'misdeeds' in Calcutta. In this project, Francis got support from his three influential parliamentary friends- Edmund Burke, C.J. Fox and Sheridan. They brought twenty charges of corruptions and misconduct against Warren Hastings in a protracted trial against him beginning from 1785 and ending in 1795. warren hastings was acquitted. Hastings' acquittal undermined the image of Francis and did not consequently succeed in getting the post of Governor Generalship to which he looked for so avidly. However, his crude satisfaction was that he could at least force Warren Hastings to pay out in his long trial all his earnings that he made (in Francis's language 'plundered') from India.'

But how unhappy and short lived was his Indian career, Francis established a permanent place for himself in the history of Bengal by his role in developing the idea of Permanent Settlement for Bengal. As a member of the Governor General and Council, Francis first floated in 1776 the idea of making a Permanent Settlement with zamindars for revenue management in Bengal. Francis noticed that Bengal was in a state decay and to reverse this trend he drew out his famous 'Plan for a Settlement of the Revenues of Bengal, Bihar and Orissa' on 22 January 1776. Francis' plan was first adopted by Thomas Law for his revenue experiments in Bihar. Governor General lord cornwallis adopted tentatively the idea in 1789-90 when he concluded the Decennial Settlement in Bengal with a declaration that if the ten-year settlement yielded the expected results, the settlement would be declared permanent which was done in 1793 by enacting the 'Act-I, 1793'.

In his thought about creating a permanent landlord class vested with proprietary right on land in Bengal, Philip Francis was influenced by the French physiocratic thought. But never he did visualize that the application of political economy of France and England would be totally unworkable in a land like Bengal where property on land always lay in the control of the traditional endogamous community and not in the person of an individual. Individualism was unknown in the Bengal social structure of the time. The zamindari system thus failed to motivate the peasantry to bring a change in their economy for the better. To them security and comfort of life lay in the lineage based property relations not in the private property in the person of zamindars and talukdars. Philip Francis, therefore, must take quite a major share of responsibility in proposing such a system for land control in Bengal. [Sirajul Islam]