Fulhar Building Complex located on the right bank of the Karatoya in the village of Fulhar in Govindaganj upazila of Gaibandha district. It is not very far from the ancient Fort of Ghoraghat in Dinajpur district. The buildings of the complex are well arranged - a three-domed mosque in the west, a series of four small structures of varying dimensions in the east and another structure of considerable size in the north, while the southern side is now open. 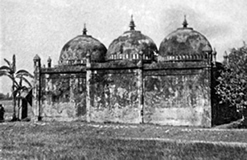 The entire building complex is of brick with smooth plaster covering, a distinguishing feature of Mughal architecture in Bengal. The mosque, which forms the nucleus of the complex, is rectangular in plan, measuring 18.29m by 6.86m on the outside and emphasised by octagonal corner towers, all rising high above the horizontal parapet and terminating in kiosks and ribbed cupolas crowned with kalasa finials. The three equal square bays inside the mosque, formed by two east-west transverse arches, are covered with three domes. All the domes, equal in size, are placed directly on octagonal drums and topped by lotuses with kalasa finials. They are carried on the east-west wide arches and the blocked arches over the mihrabs and the doorways, and the upper corners between these arches are filled with triangular pendentives. The mosque has five doorways - three in the eastern facade and one each on the north and south sides. In the axis of the three eastern doorways there are three semi-octagonal mihrabs inside the qibla wall. The central archway and the central mihrab, which are bigger than their flanking counterparts, are marked with rectangular outer projections with bordering turrets, which are carried beyond the horizontal parapets and topped over with small cupolas.

Any inscription does not date the mosque. But on the ground of stylistic similarity with the dariyapur mosque (1717-18) of Pirganj upazila of Rangpur, which is about 12 miles away, an early 18th century date may be suggested.

Of the series of four single-roomed structures of the complex, built on the same line on the north-south axis at a distance of 11.85m to the east of the three-domed mosque, the northern one is the smallest and square in plan (2.59m a side). It is entered only from the west by a single archway. Inside, there is a double-stepped small square platform in the centre. It has a pyramidal roof with a lotus and kalasa finial. Its four walls, both internally and externally, are covered with plaster, much of which has flaked off.

The second building of the series, which is about a metre to the south of the one just described, is rectangular in size, 4.88m from north to south and 2.59m from east to west. It also has a single doorway in the west, with cuspings in its face. The doorway is flanked on either side by a deep arched alcove. The arches of the alcoves spring from slender ornamental pilasters. The eastern facade above the doorway level is enriched with a frieze of sunken panels, decorated with small flowery trees in stucco. Inside the building there is a double stepped platform in the centre of the east wall. The building is covered with a typical do-chala roof crowned with kalasa finials - one in the centre and one at either end.

The third building from the north is also rectangular (4.34m × 2.90m) in plan and plastered all over, but much of the plaster has flaked off. The building is covered with a typical chau-chala roof and has an archway in the middle of the west wall.A horizontal eave cornice runs all round the building and above the roof on four corners are kiosks with ribbed cupolas like those over the corner towers of the mosque. Inside the building there is also a double-stepped low platform placed centrally along the east wall.

The fourth or the last building of the series, differing only in its dimensions, is in plan and constructional details a copy of the one just described. Its outside measurement is 5.79m x 2.74m. The heavy floods of 1988 caused the collapse of the building except the north and west walls up to the height of 1m from the ground

The building occupying the northern side of the complex is locally called the Diwan ghar. It consists of an oblong inner apartment and a veranda on its south. The inner apartment (6.71m ' 3.05m.) is entered from the west by a single doorway and from the south by three more archways.

In front of this Diwan ghar there is a stepped sarcophagus of brick. Who lies buried here is not exactly known. But the local legends ascribe it to one Pir Baba, who is said to have been the founder of this establishment. The Diwan ghar and the four small structures are in style and construction similar to the three-domed mosque.

Why was the complex builtFoodgrain Nothing definite is known about its functions, but an idea can be formed in the light of the local legends and the history of Islamic architecture. The legends indicate that the complex was a centre of Islamic mystic activities by ascribing the four small structures to four sufi orders - Qadiriya, Chixtiya, Naqxbandia and Mujaddadia. Perhaps it was a sufi establishment or a Khanqah, but its simultaneous attachment to four sufi orders is almost impossible, because each of these sufi doctrines differs fundamentally from the others and as such they cannot co-exist at the same place.

As originally built the three-domed mosque was for congregational and daily prayers, and the so-called Diwan Ghar perhaps for serious discussions on different aspects of Islamic xariah. Of the four small structures the saint may have used the northernmost one, having a low platform inside in the centre, as a meditation chamber. The remaining three, each with a low platform in the interior along the east wall, were possibly designed and used for teaching the students, and also for the jikr by the murids of the saint. The Fulhar complex seems to have been the astanah or a khanqah of a saint who is still unknown but lies buried in front of the Diwan ghar. It is worth noting that there is no residential building in the complex, and as such it is likely that it was a non-residential khanqah like some others of the kind in Egypt and elsewhere. In that case the saint belonging to this khanqah must have had his residence somewhere near the complex. [MA Bari]