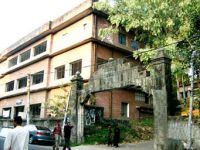 General Hospital, Chittagong was originally established as a dispensary in 1840. The clinic was developed into a General Hospital on the Rangmahal Hill in Andarkilla, Chittagong. This hill is historically important as the site of the Arakani Fort, which was burnt and ravaged by the action of the Mughal Navy in their endeavour to conquer Chittagong in AD 1666.

A Dhyani Buddha (Buddha at meditation) Sculpture was found on the Rangmahal Hill under a Shimul tree on 20 July 1904. This sculpture is now preserved in the Chittagong Buddha Vihara. The vestiges of a 2.24m wide ruined wall are currently traceable underneath an extension of the hospital building to the north. The two-storeyed hospital building, with a trigonal engaged tower containing spiral stairs in the centre of the north fa'ade, had an accommodation for 52 indoor patients, 40 males and 12 females. This colonial building is now being conserved and remains a landmark of the city. [Shamsul Hossain]