Geographical Information Systems (GIS) are systems designed to store and manipulate data relating to locations on the earth's surface. The major advantage of GIS is that it can read and analyse different layers of spatial information in the form of maps and satellite images easily and allows identifying the spatial relationships.

In Bangladesh there is a growing application of GIS in land inventories, the population census, urban planning, forestry, petroleum and gas exploration industries, utilities, transportation systems and so on, where the data banks contain locational references such as a district, or the actual boundaries of land parcels. 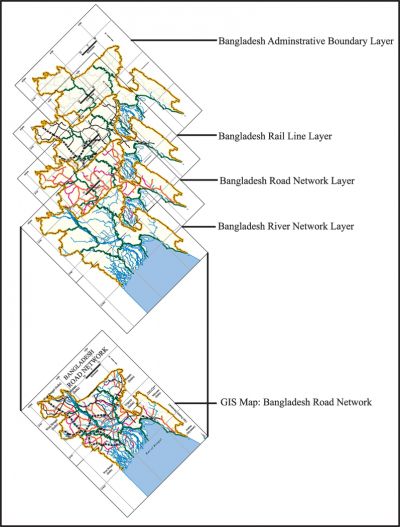 GISs are run on the all spectrum of computer systems ranging from personal computers (PCs) to multi-user supercomputers, and are available in a wide variety of software languages. There are number of tools that are essential for effective GIS establishment which are computer, digitizer, GPS (Global Positioning System), plotter, network, CD-ROM drive, printer and of course software which links all of the equipment to run properly.

Canada has been a pioneer in the development of GIS. The Canada Geographic Information System (CGIS), initiated in 1963 by the Agriculture Rehabilitation and Development Agency, was the first operational land resource GIS. Another early system was the Geographically Referenced Data Retrieval System of Statistics Canada, started around 1965. But GIS was not widely used until late 1970s, when technological improvements and lower costs made computers widely available. The use of GIS tools has grown dramatically in the 1980s from obscurity to become commonplace in businesses, universities and government where they are now used for many diverse applications.

The use of GIS application in Bangladesh started in 1991 by ISPAN (Irrigation Support Project for Asia and the Near East) for the FAP-19 (Flood Action Plan-19) project. The organisation is now named as EGIS (Environmental and GIS Support Projects for Water Sector Planning). At present there are over 50 GIS installations in the country. At the beginning, most of the GIS installations were donor supported and operated by foreign experts with limited local personnel. Now the situation has changed, a number of government and non-government organisations have installed GIS with their own finance and are operated by local expert.

Organisational applications The application of GIS is new in Bangladesh because of its higher hardware installation cost and lack of expertise. In spite of these hurdles it is developing steadily. GIS is a need to a wide variety of users for planning, development and monitoring purposes in various organisations. Brief descriptions of them are as follows:

Ministry of Agriculture (MOA) has executed some projects where GIS is used as an essential tool. National Minor Irrigation Development Project (NMIDP) is one of them. This department also controls the activities of Bangladesh Agricultural Research Council (BARC). BARC is executing a project entitled 'Utilisation of Agro-ecological Zones Database and Installation of GIS for Agricultural Development' initiated in 1996 with technical support from UNDP and FAO. The main objective of the project is to create a National Agriculture Land Information System Database in GIS environment to fulfil the agricultural planning and research needs.

Bangladesh Forest Department has installed GIS set up in 1995 and executed Forest Resource Management Project with the assistance of World Bank. The main activities include forest plantation planning as well as to provide professional and technical services in the field of GIS and associated technologies. The department prepared forest plantation maps for specific site matching.

A range of environmental and GIS projects initiated in 1991 under the FAP-19 were ultimately integrated into a single Environmental and GIS Support Projects for Water Sector Planning (EGIS) in 1995. It is a project under the Ministry of Water Resources funded by the Government of the Netherlands. But in 2002, EGIS established an independent institute named 'Centre for Environmental and Geographic Information Services' (CEGIS). A Board of Trustees governs this institution with major representation from public agencies. CEGIS services are available for public and private sectors for GIS based consultancy, training and research and development.

It may be wise to mention here that EGIS has been a pioneer organisation in the development of GIS in Bangladesh. It has developed capabilities in terms of experience, hardware and software for digital image processing, analysis, building digital spatial databases, modelling, differential GPS surveys and meta-databases. EGIS also attempts to collect data sources from high-resolution optical images (European ERS-1, ERS-2, Canadian RADERSAT-1 SAR images) that can be used for planning and management.

Local Government Engineering Department (LGED) has established GIS set-up in early nineties to facilitate establishment and maintenance of computerised national database for implementation of the rural infrastructure development programmes in Bangladesh. The GIS unit of LGED has completed so far all upazila/thana base maps, district maps and road maps of the country. All these maps contain various layers including administrative boundaries, physical infrastructure, educational institutions, settlement patterns, agriculture and socio-economic infrastructures based on nation wide coverage of SPOT panchromatic satellite imagery of 1989. LGED has also developed a number of GIS based planning tools to be used by the decision-makers at the local level.

The major GIS (installed in 1991) activities of SPARRSO are to facilitate remote sensing and other spatial and attribute data for various applications in environment and resource sectors. The successful projects of SPARRSO in this regard are Crop Assessment, Forest Cover Mapping, Shrimp Culture Potentiality Mapping, Census Mapping, Monitoring of Ecological Changes, and Landuse Mapping.

The Water Resources Planning Organisation (WARPO) prepared and updated 'National Water Resources Database' (NWRD) for preparing the National Water Policy adopted by the Government of Bangladesh. The database is designed with SQL (Structured Query Language) in back-end and GIS based graphical user interfaces in front-end. The primary activity of NWRD is to meet the demand of water resource planners for a consolidated and reliable data bank.

The following table represents some common fields and activities of GIS technique with concerned organisations:

Current trend In Bangladesh Agro-ecological Zoning (AEZ) method is important in finding the rational solutions of various problems like soil fertility constraints, landuse changes, land degradation assessment and possible control measures of land resources for planning at sustainable level. AEZ also provides the techniques to spatially discriminate areas with unique combination of physiography (landscape, geology) soil, hydrological and agro-climatic characteristics. The databases of AEZ collected from 1980 to 1987 are housed at BARC computer centre, Dhaka. It is now being used to generate readily accessible information on the land resources of the country for researchers, extension workers and decision-makers of land and agricultural resources management as well as agricultural development planning. This database constitutes the foundation for a new effort to develop a comprehensive multiscale GIS based Land Resources Information System (LRIS). The LRIS also includes additional databases on socio-economic and demographic factors influencing agricultural production.

GIS based flood-forecast models (MIKE-11) have recently been developed in Bangladesh. MIKE-11 and its GIS interfaces are suitable for application at the planning, design, implementation and operation levels. In the planning and design phase, the MIKE-11 system is a valuable tool for determining flood control and drainage structure operation rules, and providing inputs to flood preparedness programmes. At the implementation stage, MIKE-11 may be useful for a range of needs from scheduling flood prone construction works to a flood preparedness training aid.

Recently several alleviation schemes have been proposed to get rid off water logging problems of Dhaka City and a pilot hydrodynamic drainage model using GIS technology is made for low-lying parts of the city. Similarly, Digital Elevation Model (DEM) and SWMC's MOUSE model have also been installed to evaluate the various alleviation schemes.