Ghani a traditional device to extract oil from mustard, sesame, ricinus (redi) and meat of ripe coconut, etc. The ghani consists of a wooden structure with a bucket like container at the top. The raw materials used in producing oil are poured in small amounts in this container. Once the materials are put into the ghani they fall in gradual showers in its receiving section of it and are pressed into oil. Instead of a mechanised motor, animal power is used to push the ghani. 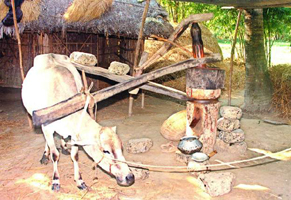 Horse and bullock are most often used for the purpose. Only one animal is used at a time. Before the animal is put into action, two bamboo made thin eye barriers are fastened to block their side vision. This is purposely done to keep the animal moving only in the frontal circular direction.

From the ghani, the oil comes out slowly by a metallic path to fall in a container placed below. Through a different route of the ghani comes the khail (oil cake), which is collected in a wide-mouthed pot. The khail is re-circulated in the ghani until the oil is extracted in full.

Hindu oil pressers come from scheduled caste (low caste) families. Muslims involved in this occupation are also placed low in the social hierarchy. However, it is a hereditary profession only among Hindus. People of the profession are labeled as kalu.

With the spread of oil mills, the extraction of oil has become mechanised. This has led to a decline in the use of ghani. People involved in the profession are now forced to seek alternative employment. [KMA Aziz]