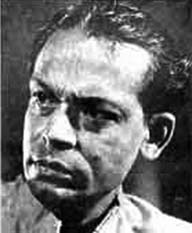 Ghatak, Ritwik Kumar (1925-1976) filmmaker, script writer, actor, was born on 4 November 1925 in Dhaka. His father Suresh Chandra Ghatak was a district magistrate, poet, playwright. His mother's name was Indubala Devi. His family moved to Kolkata in phases. The events like Bengal famine of 1943, communal riots of 1946, partition of Bengal in 1947, and some other events influenced the Ghataks to migrate to Calcutta in phases. Ritwik's elder brother Manish Ghatak, a professor and a writer was deeply involved with tebhaga movement.

Ritwik Ghatak,s initial schooling was at the Mission School in Mymensingh. Later he moved to Baliganj Govt. High Schoool, Kolkata. In 1958 he completed his graduation from Krishnath College in Baharampur. Later he got admission at calcutta university for MA degree, but he did not complete the course, because he found writing was more worthwhile than having a degree at the University.

He started contributing to several papers such as, The Desh, The Xanibarer Chithi, The Agrani. He made an instant reputation as a writer.

Ritwik Ghatak became a celebrity through the publication of his play (1948) in the Nabanna. He worked as an assistant director in the film Bedini (1951) which was based on the novel Nagini kanyar Kahini. In 1951, he joined the Indian People's Theatre Association (IPTA). Next year he made film Nagarik. He made Dalil (1952) theatre, this play won the first prize from the all Indian People's Theatre Association Exhibition held in Mumbai in 1953. In 1955 he made his Group-theatre and staged his play Sanko.

Ghatak's first commercial venture was Ajantrik (1958), a film with science fiction themes. It was one of the earliest Indian films to portray an inanimate object, in this case an automobile, as a character in the story. Besides, his greatest commercial success as a script writer was for Hindi film Madhumati (1958), one of the earliest films to deal with the theme of reincarnation, directed by film maker Bimal Ray. This film earned the first award from the Filmfare Best Story Award.

As an independed director Ritwik Ghatak directed eight full-length films. His noted films include Meghe Dhaka Tara (1960), which deals with the struggling life of a refugee family. In it the elder daughter of the family shoulders responsibilities of the poverty-trodden family. Her sacrifices included all bizarre acts, even her valued person. He displayed the city Kolkata in the eye of a run away boy in the film Bari Theke Paliye (1958), In Komal Gandhar (1961) film, he reflected his personal life and outlook. In 2007 his film Titas Ekti Nadir Nam (1973) topped the list of best 10 films rated by the British Film Institute. His last film was the autobiographical Yukti Takko Aar Gappo (1974).