Goiter enlargement of the thyroid gland, due to lack of iodine in the diet or in drinking water, inflammation from infection, tumors, or hypofunction of the thyroid gland. The swollen thyroid shows up conspicuously in front of the throat. Although most goitrous glands are usually confined to the neck, occasionally they may extend into the upper thorax, or more rarely may be intrathoracic. 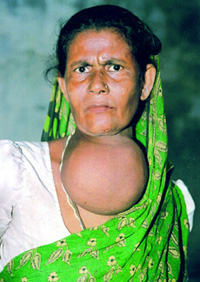 There are several types of goiters: (i) benign, (ii) nodular, or (iii) adenomatous growth, or (iv) diffusely hyperplastic enlargement. In acute cases, the goiter grows rapidly, while in the adenomatous type, a goiter is caused by the growth of an encapsulated adenoma.

The nodular form contains nodules, while in a diffuse goiter the thyroid tissue is diffuse, in contrast to the nodular form. A goiter may be cystic when a cyst or cysts are formed, possibly from the degenerated tissues. A normal human thyriod gland weighs only 20 to 30 g, but a large-sized goiter may weigh as much as 1 kg.

Endemic goiters occur in a relatively large proportion of population in certain geographic localities of the world, where iodine content in food and water is deficient or exceedingly low. Nodular goiters also occur sporadically in areas where goiters are nonendemic. Besides iodine deficiency in food, a number of different factors may collectively initiate abnormal growth of the thyroid gland.

In some individuals thyroid enlargement is the result of a genetically determined defect in the biosynthesis of thyroid hormone.

Although some form of goiter is found in almost all countries of the world, the incidence of this disorder is quite high in the Indian subcontinent, especially in the Himalayan belt. Incidences of goiter have also been mentioned in ancient Indian, Egyptian, and Chinese art and literature; marine fish and algae were used as food for its cure. It has been estimated that about 100 million people of China, India, Nepal, Bhutan, Bangladesh, Myanmar, Sri Lanka, Thailand, and Indonesia suffer from goiters due to iodine deficiency. In Bangladesh certain northern districts, particularly Rangpur, Gaibandha, Nilphamari, and Dinajpur are considered as goiter-prone areas.

In 1981-82, the Government of Bangladesh and WHO jointly conducted a survey on the status of iodine deficiency disorders of the country. It was reported that more than 30 million people in the country have the benign or primary state of goiter and other form of iodine deficiency maladies. About 11 percent of the population is affected by visible goiter, the prevalence being much higher in females. About 30 percent of the population of greater Rangpur and Dinajpur districts in the north show incidences of goiter. The incidence in Chittagong, Khulna and Mymensingh areas is also fairly high. Endemic goiters may slowly diminish in size with iodine administration. Some sporadic goiters respond to treatment with replacement doses of thyroid extract.

Programmes to mitigate goiter and other iodine deficiency disorders started in Bangladesh in 1977. The Institute of Nutrition and Food Science of Dhaka University in cooperation with UNICEF administered Lepiodol injection to about 95,000 people in nine districts. Similarly, in 1983 the Institute of Public Health with assistance from UNICEF provided injections to about 80,000 people of Jaldhaka upazila in Rangpur district. The project to incorporate iodine in edible salt started from 1985. It is now mandatory to market iodized salts, and nearly two dozens enterprises produce such edible salts according to government specifications. The Institute of Food Sciences and Technology (IFST) of the Bangladesh Council of Scientific and Industrial Research (BCSIR) has developed a simple procedure and technology of producing, preserving, and the marketing this commodity. IFST also monitors the effectiveness of this programme. [SM Humayun Kabir]