Gravel unconsolidated, natural accumulation of rounded rock fragments resulting from erosion, consisting predominantly of particles larger than sand (diameter greater than 2 mm) such as boulders, cobbles, pebbles, granules, or any combination of these fragments; the unconsolidated equivalent of conglomerate. In economic geology, alluvial deposits consist mainly of gravel but commonly include sand and clay. They may be used as a construction material, either directly as fill or as aggregate in concrete. 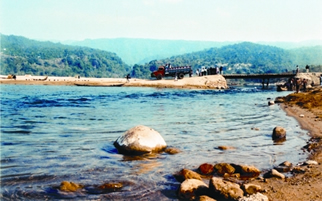 Wide areas of northern and northeastern parts of Bangladesh are covered with gravel beds. In the north the gravels are well exposed at Dahagram-Angorpota, Patgram, Dalia, Chapani, Kaliganj in greater Rangpur and Tentulia, Vazanpur, Boalmari, etc in greater Dinajpur areas. These gravels are quite large (maximum recorded elongation is 30 cm) and are alternated with very coarse to medium sand. They are quite fresh and well rounded, with a smooth surface. The sphericity and roundness of these gravels are high and they have quartz, quartzite, granite, gneiss and schist as their dominant lithologies.

Composition of these gravels is identical with that of the Daling series of the himalayas. These gravel beds are grouped together as the Panchagarh Sandy-Gravel Beds belonging to the Upper Pleistocene Series. They are overlain by the Holocene Series represented by alluvium and sometimes-fine sand, silt and clay.

The geological history and the environment of deposition of the Panchagarh Sandy-gravel Beds are quite interesting. During the last glacial maximum (ie 18,000 years before present - BP) the Himalayas were quite high and were glaciated. The glaciers extended up to the foothills. Dry climatic conditions prevailed during that time and the melt water was flowing over the Bengal plain through some narrow and deeply incised river systems. At the end of the last glaciation (upper part of Upper Pleistocene) monsoon rainfall was quite prominent and the glacier also started melting. The melt water plus the amplified monsoon water flowed over the Bengal plain. The narrow river systems were over-loaded and surplus water flowed over the barind tract. During that time, Barind initial surfaces were dissected leaving some north-south elongated red bed islands as exhibited by the present morphology of the Barind Tract. These enormous water flows carried the gravels up to the Panchagarh-Dahagram-Dalia area and were deposited as some piedmont deposits.

On the other hand, the gravels of the northeastern part of Bangladesh are well exposed in the Jaintiapur-Bholaganj area in greater Sylhet district. Here the gravel beds are divided into two lithostratigraphic sub-units: older sub-unit (high terrace) and younger sub-unit (low terrace). The older sub-unit in the Jaintiapur area and Binda Tila caps the hill tops and has been named the 'Sona Tila Gravel Bed'. Similarly, the younger sub-unit of the Bholaganj area and the river bed deposits of the present river system have been named the Bholaganj Gravel Bed. Both the sub-units belong to the Dihing Formation.

The Sona Tila Gravel Bed is equivalent to the Lower Pleistocene Series and belongs to the Madhupur Clay Formation while the Bholaganj Gravel Bed is equivalent to the Upper Pleistocene to Holocene Series. Similarly, the former is weathered and the latter is fresh, hard and high quality derived from the Khasi-Jaintia Hill Ranges. The gravels of both the beds are of igneous and metamorphic origin. They have high sphericity and roundness values and as such suggest long transportation and longtime abrasion of the gravel sediments. They are made up of river borne deposits.

Apart from these, numerous hill streams also deposit gravels on the streambeds of the hill ranges and in the plains close to these ranges. These hill ranges are mostly located in the Sylhet, Chittagong and Chittagong Hill Tracts regions. Also in the Teknaf-Cox's Bazar sea beach, seven separate occurrences of gravels are present between Maderbunia Chhara and Rajar Chhara. These gravels are of sedimentary origin and mostly belong to the Surma and' Tipam Group of sediments. Proper excavation of gravel may partially fulfil the country's demand' for constructing roads, bridges, dams and embankments etc. [Sifatul Quader Chowdhury]