Green Revolution refers mainly to spectacular increase in wheat, rice and corn yields in many countries of the world in the late 20th century due largely to the use of high yielding varieties, chemical fertilizers, pesticides and irrigation water. Here, the world 'revolution' has been used to mean a quick change. This change came from transformation of conventional cultivation system to a high yielding cultivation system with new technologies. This change occurred silently to reduce hunger of millions of people in the world.

The word 'green' is used to symbolize green colour of crops at younger stage. As crops grow, their pleasing green colour comes to light. The term 'green revolution' was first used on March 8, 1968 by former USAID Director william S Gaud while addressing the society for International Development to mean a rapid change in crop production that has occurred through innovation and adoption of new technologies in agriculture. Goud said, 'It is not violent Red Revolution like that of the Soviets, nor is it a While Revolution like that of the Shah of Iran. I call it the Green Revolution.' After that scientists connected with agricultural development have used the term repeatedly. Nobel laureate Dr. Norman Earnst Borlaug used this term more than once in his Nobel lecture while describing the effect of research and technology development on the increase of production in agricultural. The term represents a strategy of quick increase in agricultural production through the use of a production package that contains improved seed, chemical fertilizers, pesticides, irrigation water and improved management. The food production in the planet increased by two and a half times between 1950 and 1995 due to adoption of green revolution technology package in agriculture. As a result, least developed countries were able to escape famine, which would have been otherwise unabated. 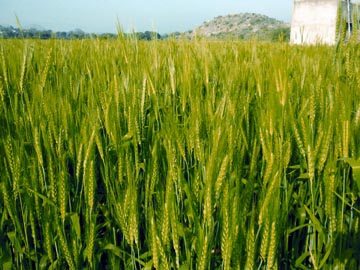 Green revolution was first initiated in 1944 in Maxico. This got momentum mainly with the development of a number of high yielding wheat varieties in the late 1940s. Dr. Norman E. Borlaug, an agricultural scientist, who won the Nobel peace prize in 1970 led the revolution. As a result of this revolution, Maxico became self-sufficient in food-grain production in 1951 that used to depend on imports for half of its food-grain requirements. In 1964, the country was able to export about a half million ton of wheat.

This was possible through the adoption of disease resistant, dwarf and non-lodging high yielding varieties of wheat responsive to fertilizer and creation of adequate research infrastructure conducive to innovation and development.

Fertilizer responsive high yielding what vanities developed in Maxico were largely adopted in America. As a result, production of what dramatically increased. The country became self sufficient in food-grain production in the 1950s and started to export food-grains in the 1960s, which was basically a food importing country in the 1940s.' 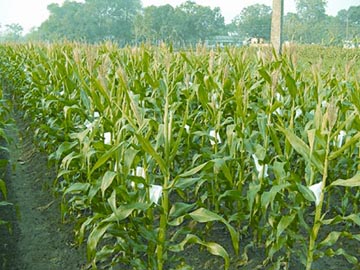 Two international research organisations, namely, International Maize and Wheat Improvement Center (Centro Internacional de Majoramiento de Maizy Trigo, or CIMMYT) and International Rice Research Institute (IRRI) have contributed significantly to the success of green revolution. Semi-dwarf high yielding verities of wheat, maize and rice were released from those institutes and were adopted quickly to different countries of the world. Thus, production of food-grains increased significantly throughout the world, marking the phenomenon as green revolution. This was first initiated in Mexico in 1944. In that year, Dr. Norman E. Borlang, a plant breeder of America joined agricultural research in Mexico. He and other members of his research team developed few varieties of wheat that were disease resistant. Wheat production in Mexico increased rapidly with the adoption of those new varieties and the country became self-sufficient in food by 1956. In 1953, Dr. Borlaug acquired Japanese dwarf variety of wheat called Norin 10 developed by Orville Vogel that had been crossed with a high-yielding American cultivar called Brevor 14. The resultant Norin 10/ Brevor is semi-dwarf and produces more stalks and thus more heads of grain per plant. Dr. Borlaug crossbred the semi-dwarf Norin 10/ Brevor cultivar with his disease resistant cultivars to produce wheat varieties that were adopted to tropical and sub-tropical climate. This new semi-dwarf, disease-resistant varieties, called Pitic 62 and Penjamo 62, changed the potential yield of wheat dramatically. By 1963, 95% of Maxico's wheat crops used these varieties. That year, the harvest was six times lager than in 1944. Maxico had become fully self-sufficient in wheat production, and a net exporter of wheat. This quiet revolution in food production experienced in Maxico laied the foundation of green revaluation in other countries of the world in the 1970s and 1980s. In 1963, agricultural research activities in Mexico led by Dr. Borlaug was institutionalized as an international center for research on maize and wheat and the International Center for Maize and Wheat Improvement (CIMMYT) was established. This was funded jointly by the Ford and Rockefeller Foundation, U.S. AID, UNDP in collaboration with the government of Maxico. Before the establishment of CIMMYT, the Government of the Republic of Philippines with Food and Rockefeller Foundation established IRRI in 1960 at Los Banos, Manila. Borlaug's work with wheat led to development of high-yielding semi-dwarf Indica and Japonica rice cultivars at IRRI. Rice crossing between Chinese Dee-geo-woo-gen and Indonesian Peta was done in 1962. In 1966, one of the breeding lines became a new cultivar, IR8. This required the use of fertilizers and pesticides, but produced substantially higher yields than the traditional cultivars. This was popularly known as 'Miracle rice'. After successful adoption of this variety, Philippines achieved self-sufficiency in food very quickly. Annual rice production in the Philippines increased from 3.7 to 7.7 millions tons in two decades. The switch to IR8 rice made the country a rice exporter, which was earlier a net importer of rice. In course of time, the semi-dwarf, non-lodging disease-resistant and fertilizer responsive new wheat and rice varieties were largely adopted in Asia, Latin America and Africa. As a result food-grain production in the world increased dramatically making the world self-sufficient in food. Dr. Brolaug was awarded Nobel Peace Prize in 1970. He was recognized as the father of green revolution. 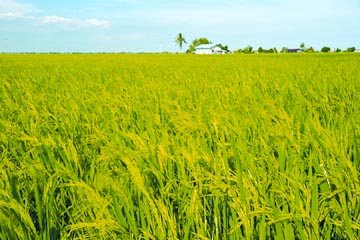 Now one can examine the status of green revolution in Bangladesh. The spread of 'seed-fertilize-water' technology popularly known as green revolution began in Bangladesh in the 1960s. At that time farmers rarely used fertilizers, pesticides and modern irrigation equipments. Bangladeshi farmers used traditional methods of farming that they practiced since thousands of years. Initially Bangladesh Water Development Board (BWDB) developed multipurpose flood control, drainage and irrigation projects. Meanwhile, Bangladesh Agricultural Development Corporation (BADC) introduced modern irrigation equipments, chemical fertilizers, pesticides and new varieties of high-yielding seeds developed by international and national research institutes. This laid the foundation for green revolution. The spread of green revolution and the consequent increase in food production was fairly noticeable after the independence in 1972. The population of Bangladesh was 75 million at that time, which increased to 150 million in 2010. During that period food-grain production increased from 10 million tons to 37 million tons in the country indicating a significant positive effect of green revolution. In this way, Bangladesh and the contemporary world escaped mass hunger and famine due to introduction of green revolution in agriculture.

Critics of green revolution argue that farmers have forgotten traditional agricultural practices sine the introduction of green revolution and thus the world has experienced a great loss of biodiversity. More particularly, the threat to traditional verities of cereals became evident with the advent of biotechnology. They also argue that the green revolution is landlord biased. It benefited mostly those with large size of landholding and sufficient resources required for procuring inputs. The poor peasants and landless laborers with little or no resource base remained more or less deprived of the gains accrued from the green revolution. Thus, income inequality in the society has increased. They argue further that green revolution and its inherent larger production have created marketing problem and depressed cereal prices. As a result, farmer's profit has declined because of rising cost of inputs and inadequate increase in the price of outputs. Thus, some critics have said that green revolution has created more problems than it has solved. However, the father of green revolution Dr. Borlaug in his Nobel lecture said, 'I believe it is far better for mankind to be struggling with new problems caused by abundance rather than with the old problem of famine. In reality, the production increases fostered by the green revolution should be strongly credited for helping to avoid widespread famine and for feeding billions of new people in the world. [Jahangir Alam]