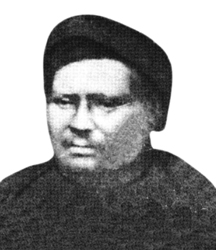 Gupta, Ishwar Chandra (1812-1859) poet and journalist, was born on March 1812 at the Kanchanpolli or Kanchrapara village in 24-Parganas in west bengal. His father, Harinarayan Gupta, was a medical practitioner of Ayurvedic school.

After his mother's death, Ishwar Chandra was brought up by his maternal uncle. Though not particularly studious, he was intelligent and learned Bangla, Sanskrit, and English as well as vedanta philosophy. He was inspired by Premchandra Tarkavagish, a professor of sanskrit college, and, helped by his friend Jogendra Mohan Tagore of Pathuriaghata, he started the weekly sangbad prabhakar from 28 January 1831. After about a year, however, the publication stopped for lack of finances. In 10 August 1836 the publication of the journal restarted, finally becoming a daily from 4 June 1839. Sangbad Prabhakar played an important role in forming modern Bengali society.

Ishwar Chandra was highly traditional in outlook. He was critical of both young bengal movement and hindu college. He also opposed iswar chandra vidyasagar's movement for widow remarriage and wrote many satirical poems on the subject. However, gradually his outlook and tried to understand his time more objectively. He began delivering speeches at the Hindu Philanthropic Society and in the tattvabodhini sabha. He started supporting the idea of the remarriage of virgin widows and women's education.

Ishwar Chandra is known as the poet of the transitional period of bangla literature. Though his language, rhythm, and figures of speech were essentially medieval, his subjects were, however, contemporary. He introduced the trend of writing short poems. His writing, in which he was inspired by kaviyals or professional versifiers, is in the main satiric. In the Sambad Prabhakar, he published many short, satiric poems on contemporary events. He also wrote nationalistic poems. His play Bodhenduvikash (1863), which was published posthumously, shows his remarkable control over language and rhythm.

Ishwar Chandra was a nationalist, with strong feelings for his land and his language. He started a movement for the improvement of Bangla and also made it a point to use Bangla words unaffected by English.

Among his other important contributions are his biographies of Bharatchandra, Ramprasad Sen, Ramnidhi Gupta, Haru Thakur, and other poets.'