Gupta Coins The establishment of the Gupta Empire in the fourth century AD heralded a new era in the history of numismatics. The Gupta coinage started with a remarkable series in gold issued by Chandragupta I, the third ruler of the dynasty, who issued a single type- the king and queen - depicting the portraits of Chandragupta and his queen Kumaradevi with their names on the obverse and the goddess seated on a lion with the legend Lichchhavyah on the reverse. Though some specimens of this type have been discovered from the districts of 24-Parganas (North) and Burdwan, Bengal did not come under the Gupta rule till the time of Samudragupta, whose Allahabad inscription places samatata amongst the frontier kingdoms. 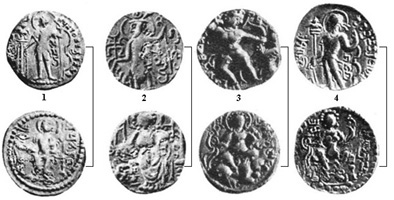 Of the seven types of gold coins issued by Samudragupta three viz. Standard, Archer and Ashvamedha are known to be from Bengal. The standard type discovered from Bangladesh, Midnapore, Burdwan, hughli and 24-Parganas (North) depict the standing king holding a standard and offering oblations on a fire-altar. The reverse show a goddess seated on a throne holding a cornucopia and the legend Parakramah. The Archer type, found from 24-Parganas (North), depicts the king standing, holding a bow and arrow with Samudra written under his left arm. The reverse is the same as on the standard type except the legend, which reads Apratirathah ie 'matchless warrior'. The Ashvamedha type, discovered in the Comilla district, shows an uncaparisoned horse in front of a sacrificial post with a flowing banner. The reverse shows a female (probably the chief queen) standing in front of an ornamental spear (suchi) with a flywhisk over her right shoulder and the legend shvamedhaparakramah. No specimens of the battle-axe, tiger-slayer, lyrist and Kacha types of Samudragupta are known from Bengal.

Only two types of coins of Chandragupta II, who incorporated vanga in the Gupta Empire, are known from Bengal. His Archer type coins, which became the most popular type of coinage with the Gupta rulers after Kumaragupta I, have been found in Faridpur, Bogra, Jessore and Comilla districts of Bangladesh and Kalighat (Calcutta), Hughli, Burdwan, 24-Parganas (North) and murshidabad of West Bengal. This type has two classes (one with an enthroned goddess and the other with a goddess seated on lotus on reverse) with several varieties.

His Chhatra (Umbrella) type depicting a king offering incense on an altar while an attendant holds an umbrella over him on obverse and a goddess standing on lotus on reverse is known from the single specimen discovered from Hughli district.

His Lion-slayer, Horseman, Couch, Standard, Chakravikrama and King and Queen on Couch types have not been found in Bengal.

Kumaragupta I, who issued as many as sixteen types of gold coins, is represented by Archer (Hughli), Horseman (Midnapore and Hughli), Elephant-rider (Hughli), Lion-slayer (Bogra, Hughli and Burdwan) and Karttikeya (Burdwan) types in Bengal. The Horseman type coins depict the king riding a caparisoned horse with weapons like a bow and a sword on the obverse and a goddess sitting on a wicker stool, sometimes feeding grapes to a peacock, on the reverse side. The Elephant-rider type shows a king riding on an elephant holding a goad. An attendant holding an umbrella sits behind him. Its reverse has a goddess standing on a lotus with the legend Mahendragajah. The Lion-slayer type has a king, armed with a bow and an arrow, either combating or trampling a lion on the obverse and a goddess seated on a couchant lion and the legend Sri-Mahendrasinghah on reverse. The most beautiful in the entire series is the Karttikeya (or Peacock) type depicting the king in tribhanga posture feeding a bunch of grapes to a peacock on the obverse and the god Karttikeya seated on a peacock and the legend Mahendrakumarah on reverse.

Two types-Archer (Faridpur, Bogra, Hughli, Burdwan) and King and Queen (Midnapore) - of the four known types of Skandagupta, have been found in Bengal. The latter depicts a king and a queen (identified as goddess Laksmi by some) standing facing each other on the obverse and a goddess seated on a lotus and the legend Sri Skandaguptah on the reverse. Archer type coins of Kumaragupta II (Kalighat, North and South 24-Parganas, Midnapore), Vainyagupta (Kalighat and Hughli) Narasinghagupta (Kalighat, Hughli, Murshidabad, Birbhum and Nadia), Kumaragupta III (Hughli and Burdwan) and Visnugupta (Kalighat, Hughli and 24-Parganas, North) have been found in Bengal. Most have metrical legends inscribed in chaste Sanskrit, highlighting the issuer's achievements on the obverse of the coins. A symbol in geometrical design is usually found on the reverse of Gupta coins and a large number bear a Garuda standard on the obverse.

The Guptas followed a complex metrology for their gold coins. Though they were generally believed to have followed the Kusana weight standard of 122 grains for their early coinage after the Roman aurei, and the Indian suvarna standard of 144 grains from the time of Skandagupta onwards, yet we find a gradual increase in their weight from about 112 in the time of Chandragupta 1 to 148 grains for the coins of the last rulers. It is to be noted that their pure gold content remained 113 grains throughout except for the coins of the last three rulers. It is possible that gold coins were not accepted at their face value but at their real value. The Gupta inscriptions use the terms, dinara and suvarna for them, apparently to distinguish the lighter and heavier types respectively.

Some silver coins of Chandragupta II, Kumaragupta I and Skandagupta were discovered at Muhammadpur near Jessore in 1852 and one coin of Skandagupta has been reported from chandraketugarh. Apart from these coins, no other specimens of silver coins are known from Bengal but reference to them in the Gupta epigraphs from Bengal definitely indicate their prevalence in the country. They were issued on the weight standard of 32 grains and referred to as rupaka in the inscriptions. No copper issues of the Guptas have been reported from Bengal. [Ashvini Agrawal]