Habibullah, ABM (1911-1984) historian and writer. Abu Mohamed Habibullah was born in Burdwan district of West Bengal. His father Abdul Latif was an Inspector of Schools of Burdwan Division, while his grand father was a teacher of Arabic and Persian languages. Habibullah passed High Madrasa Examination from the Hughli Madrasa (1926), IA from the Dhaka Islamic Intermediate College (1928), BA Honours in History from hughli mohsin college (1931) and MA in History from the university of calcutta (1933). He obtained Lytton scholarship and did his PhD from the School of Oriental Studies, University of London. He obtained a Diploma in Library Science also. 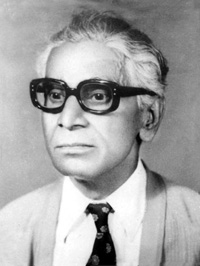 Habibullah started his career as a Librarian of the Calcutta Madrasa in 1938 and the following year joined as lecturer in History Department of the Calcutta University. In 1940 he joined the newly created Department of Islamic History and Culture of the university. Professor Habibullah joined Dhaka University in 1950 and became the Head of the Department of Islamic History and Culture, and continued to serve the department till his retirement in 1973. He was Dean of the Faculty of Arts (1961-63), President of Dhaka University Teachers’ Association (1968-72), Chairman of University Grants Commission (1976-77) and Curator of Dhaka Museum.He was one of the founders of the Asiatic Society of Pakistan (now asiatic society of bangladesh).

Habibullah made very significant contribution to the medieval historiography of India. His Foundation of Muslim Rule in India is still a standard work on the early medieval history of the subcontinent. Among his other works The Descriptive Catalogue of the Persian, Urdu and Arabic Manuscripts in the Dhaka University Library (2 vols), Bilayet Nama, Tarikh-i-Assam and a translation of Alberuni's work Tahkik-i-Hind are worthy of mention. [Ratan Lal Chakraborty]