Hajiganj Fort also called Khizrpur Fort, situated at Hajiganj locality of Narayanganj on the western bank of the Sitalakshya. Having the characteristics of a water fort, it was originally built just at the point where the old Buriganga discharged into the Sitalakshya. It may have been built soon after Islam Khan established the Mughal capital at Dhaka, and was intended to countercept the raids of the Magh and Portuguese pirates. 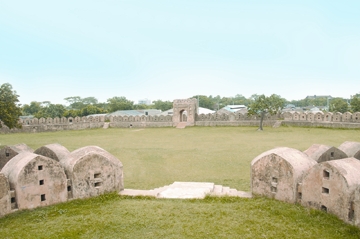 The fort, quadrangular in size, consists of a pentagonal curtain wall machicolated for muskets with rounded corner bastions. On the inner side of the curtain wall there is 1.22m high rampart walkway from the base of the curtain wall which is itself pierced by several musketry holes. Each of the corner bastions has staircase inside up to the rampart level and its merlons have wider holes in between meant for gun firing. In a corner of the fort quadrangle there is a free tall square column of brickwork which seems to be a guard tower. The existence of this column links the fort with other water forts of the time. The existence of the elevated platform for the setting of cannons is an important feature of the fort.

The only small gateway of the fort towards the river side suggests that the means of communication was by the river. The pentagonal gateway is placed in a rectangular structure with engraved rectangular arches on the both sides. The top of the gateway is decorated with lotus finial. There having no other structure inside the fort, it seems that the fort was occupied only in the rainy season when the pirates were expected, and that the occupants used tents as their shades. The fort area is now being used as the Fire Brigade headquarters of Narayanganj. [Muazzam Hussain Khan]