Hajongs are one of the indigenous communities in Bangladesh. They live mainly in the areas, such as Haluaghat and Dhobaura of Mymensingh; Shribordi, Jhinaigati and Nalitabari of Sherpur; Sunamganj sadar upazila, Dhorompasha, Taherpur, Bishwambharpur and Duarabazar of Sunamganj district. The total Hajong population at present is not more than fifteen thousand. Their presence is more visible in Komlakanda and Durgapur upazilas of Netrokona district and in the Dhobaura upazila of Mymensingh. According to the anthropologists, the original habitation of the Hajongs was in the wide expanse of North Burma. Natural disasters forced them to leave their home and migrate to the mountainous areas in the northeast Indian subcontinent and started living there temporarily. Later on, they left that place and settled down in a place called Hajo in the district of Kamrup in Assam. The word Hajong is derived from Hajo (court). It is believed that, in the seventh century, the Hajongs were driven out by maghs and Garo hills and then settled down in plain lands. 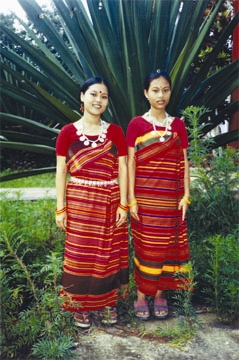 Like other indigenous communities in the northeast Indian subcontinent, the Hajongs were not accustomed to jhum cultivation. They lived on agriculture since the ancient period. Thu, many Hajongs believe that the Garos gave them the name. A popular saying among them goes: Garo gila amga nam thuchey hajong (Garos named us Hajong). In the Garo language, 'Ha' means earth and 'jong' means worm; so Hajong means earthworm. Before the partition of 1947, the Hajongs were self-reliant and self-sufficient through farming. At present their economic condition is far from satisfactory. Their literacy is frustrating, only 3%.

The physique of Hajongs is of medium-type, fair and dark brown. Bodily, they are robust and fleshy. Their fingers are quite stout and plump, and their hair, thick and black. Physically they are quite strong. Generally, they remain cheerful and humorous. The mongoloid feature is not very prominent in their physical structure; rather they resemble different indigenous communities of Southeast Asia. Bangla is the main language of the Hajongs living in Bangladesh. Their children receive education at school in Bangla and communicate with other children in the same language. However, Hajongs have their own language which they use among themselves. Since they do not have any alphabet, they use the letters of Asamiya.

The dress worn by Hajong women is called Pathin. It is woven in loom and has stripes of different colours. It is 4.5 feet long and 3.75 feet wide. Hajong women use it to tie their breasts as well. Nowadays, like the Bangalis, Hajong men wear dhoti, shirt, full pants, and similar modern dresses. Hajong women weave a particular kind of wrapper, following their own fashion, to wear during winter, which they call Argan. While cultivating aman paddy in winter in the field, women wear a girdle called banong. Hojongs make their houses with bamboos, woods, fibres of hemp, and similar materials. Generally, they like to make their houses with four thatched roofs.

Houses of four-thatched roofs have different varieties, such as: Bangala and Asamiya. In their homestead, they have different houses, such as: the dwelling house, a separate house for cooking, a cowshed, courthouse, etc.  In every homestead, they try to maintain a house (even if small) called Deo-ghar (the House of God) to worship the Creator. Everyday in the evening, they light candles and worship God through the burning of incense. The Hajongs are primarily non-vegetarian and rice is their staple food. They are fond of of fish. They do not eat beef or buffalo meat; other than these, they eat the meat of various animals and birds. They have a special liking for binni (sticky) rice. They eat different types of vegetables and lentils. Though the Hajongs like pork, they do not rear pigs. They also take milk and milk products. They rear domestic animals to cultivate land and for milk. Rice-fermented alcohol is common among them, which they drink during different festivals and in social gatherings. Hajong women make special cakes on the last day of the months of Poush and Chaitra.

Hajong society is patriarchal. Father is all in all in the family, and the role of mother is secondary. Sons inherit the entire family property, and the daughters receive nothing. If a widow does not remarry, only then she has the right to enjoy the property left by her husband. Hajongs maintain a joint-family, though nowadays they are becoming more inclined to nuclear family. For the sake of social administration, a Hajong area is divided into four administrative units. First, some families make a neighbourhood; secondly, few neighbourhood make a village; thirdly, few villages make a chakla; and fourthly, few chaklas make a Pargana.

An old, wealthy and wise man is elected the Gaobura, the village chief. His duty is to maintain the law and order of the village under his jurisdiction. The chief of a chakla, the Sorey Morol is elected by the votes of the Gaoburas. At present, the post of the chief of Pargana is non-existent among them. The Gaobura is elected permanently, and people hold a new election to choose his successor only after his death. The Sorey Morol is elected on a temporary basis. Upon discovery of any irregularity, the Gaoburas can depose him from power through a collective decision. The role of Gaoburas and Sorey Morols is crucial in maintaining peace and security in the area. The pace of development, administration, peace and law and order depends largely on their sagacity. If someone in the village is involved in anti-social activities, the Gaobura can punish him/her. He has the right to expel the guilty person from the locality or to excommunicate him.

A person cannot move from one village to settle down in another as he wills. In this case, he has to seek permission from the Gaobura who again cannot decide on his own. The Gaobura has to consult with, and seek opinion from, ten prominent elders of the village. The person who wants to leave his village has to pay a fine to the Gaobura as penalty, which the Hajongs call mati nidabi. Again, he will have to pay some more money to the Gaobura of the new village in which he settling down; they call it Gao hamakar. That person cannot get the permission to live there permanently without paying Gao hamakar.

The Hajong community has seventeen niknis (clans). These are: Porachunga, Chondi, Batajore, Balihata, Kendagao, Taragao, Jignigao, Katleygao, Boligao, Kamakha, Kharugao, Sonamoi, Chatigao, Komligao, Ghorabali, Poroshmoni and Akhigao. Nowadays, these niknis are about to be extinct. In imitation of Hindu society, instead of niknis, they use Hindu clan names like Kashyap, Bhordwaj, Shandilya, Asotyananda, etc. Now they feel more comfortable to be known as Roy, Das, Sarkar and similar Hindu family names. Monogamy is the norm among the Hajongs; however, a man can take a second wife with the permission of his first wife. At present, they do not have the system of marriage-money, but dowry is common among them. Once children become adult, they have to be initiated by the head of the community. And then the guardians think about their marriage and sometimes seek help from a third party. Before initiating marriage negotiations, they have to choose the right clan, as marriage within the same nikni (clan) is not allowed. All marital rites are performed in the house of the groom's father and the couple starts living there after marriage. Sometimes, the couple lives in the house of the bride's father, especially if she does not have any brother and if she inherits the family property. Hojong society has the system of widow remarriage.

In religious belief, the Hajongs are Hindu traditionalists. Although they follow the Hindu religion, they separately perform some of their ancient customs. In this sense, they are different from other Hindus. As regards their religious worship, they are divided into two groups: Hojong and Khatal. Hajongs worship Shakti (power, often associated with Durga), and Khatals are Vaisnava. However, both the groups worship other deities as well, such as: Saraswati, Laxmi, Kali, Durga, Kamakha, Manasa, and other gods and goddesses. The Hajongs invite the Hindu Brahmins to act as priests, while the Khatals seek the help of their clan chiefs to perform religious services. Many of the Khatals paint a trident-shaped sectarian mark on the forehead, hang basil garlands round the neck, and keep uncut hair on the head. Both the groups conclude Durga puja through collective worship. They also organise festivals during Kali puja. Apart from these traditional deities, the Hojongs have their own gods and goddesses, such as: guardian deity of the family, deity for wealth and prosperity, and a deity to cure diseases. For the guardian deity, they do not have any statue. Instead they have a clean pedestal where they offer their worship. In every Hajong family, there is a temple and basil platform for the family deity where they perform their evening rites. They call this small temple Deoghar where the Hajongs worship Vishnu. Besides these, the Hajongs have some other deities: Khangkhangi-deo, Moila-deo, Haowa-deo, Pitha-deo, Gang-deo etc. They worship Khangkhangi-deo to shield themselves from enemy attacks, worship Moila-deo for the well-being of new-born babies. When a baby falls sick they promise to offer a particular sacrifice to Moila-deo; they offer rice pound with husking pedals, seedy bananas and molasses under a particular type of tree once the baby is cured. They worship Haowa-deo for family prosperity. They promise to offer a particular sacrifice to Pitha-deo if they are visited by any find of skin diseases and infections, and complete their worship with offerings of homemade cakes once they are cured. If children suffer from fever and keep vomiting yellow spew, the Hajongs worship Gang-deo and make offerings of duck eggs. The Hajongs believe in the doctrine of rebirth that everyone will be born again according to their work. They deeply believe in pilgrimage and make regular visits to Chandranath, Langalbanda and similar places. They recite religious books like Gita, Veda and Ramayana. Among the Hajongs and Khatals, the former drink wine and the latter are teetotal.

Like the Hindus, the Hajongs cremate dead bodies. Only the sons of the deceased offer mukhagni (setting fire in the mouth of the deceased) and observe the ashoucha (impurity) period. Once the ashoucha period is over, they observe obsequies with the help of Brahmins. Throwing the cremated remains of body-ashes in the river Ganges is also part of their religious activities. Hajongs launched the Hatikheda (capture the elephant) uprising against the capricious zamindars of this country. They also played a leading role during the anti-British and tonk (spade) movements. [Subhash Jengcham]