Hakim, Khan Bahadur Abdul (1905-1985) writer, educationist and scholar. Born on 2 December 1905 in the village of Hajinagar under Harirampur upazila of Manikganj district. He was the son of Maulavi Wasimuddin Ahmed and Nasimunnesa. Abdul Hakim passed the Matriculation Examination in 1922 and ISC in 1924. 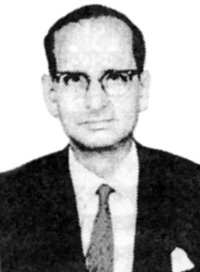 Abdul Hakim served the Karatia Sa’dat College and Krishnanagar Government College for a short time in 1931. Soon, in 1932, he joined the education department of the Government of Bengal as the Sub-Divisional Inspector of Schools. Within a short time he was promoted and performed the responsibilities of the District Inspector of Schools of Bogra and Mymensingh districts from 1934 to 1938. In view of implementing the Bengal Rural Primary Education Act, 1930, ak fazlul huq, the Chief Minister of Bengal, appointed Abdul Hakim a Special Officer for the primary education of Bengal (1938-1943).

He made some significant contributions in spreading free primary education in East Bengal. At that time he edited an educational newspaper namely Banglar Shiksak (Teachers of Bengal). In recognition of his contributions as an educationist, the British government honoured Abdul Hakim with the titles of 'Khan Saheb' in 1939.

Abdul Hakim served as the Divisional Inspector of Schools of the Dhaka and Presidency Divisions (1943-1947). In 1944 the British government awarded him the title of 'Khan Bahadur'.

Abdul Hakini authored several books on public education in Bengal. He was the Chief Editor (1961-1976) of all the four volumes of the Bangla vixwa-kos (Bengali Encyclopedia), which were published during the period from 1972 to 1977 under the Franklin Books Programmes of Dhaka and New York.

Abdul Hakim was an active member of the Senate and the Syndicate of the University of Dhaka, a life member of the Bangla Academy and a Fellow and the President (1982) of the Asiatic Society of Bangladesh. He founded a Trust Fund of taka one lakh in the Bangladesh Asiatic Society in 1984. The Government of Bangladesh awarded him the 'Ekushe Padak' in 1984. He died on 14 June 1985 at the age of 80. [Muhammad Abdus Salam]