Halud Vihara located between the Tulshiganga and Jamuna rivers in Vilasbadi Union of badalgachhi upazila, 15 km south to paharpur Buddhist Monastery, 50 km northwest to mahasthan, and 18 km north to Naogaon town. There are many scattered ancient mounds at Halud Vihara village. These remains occupy a large area, but they have been considerably encroached and destroyed by local people. This entire village, also locally known as Dvipganj, is profusely littered with old bricks, potsherds and other cultural debris. These old mounds and the name of the village suggest that there are remains of a flourishing ancient Buddhist settlement. 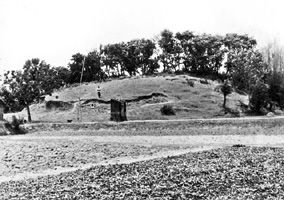 Various antiquities such as stone and metal images, terracotta plaques, ornamental bricks etc were reported from the place in the past. Ancient building remains are visible all over the area, particularly concentrated around the village hat, which occupies a large flat open area in the middle of the village. A prominent landmark in the village is a large mound situated west of the hat or the market place, about 30m long and 7.5m high from the surrounding ground. The most serious damage to the site was caused by a local family who, while building their house on its southwestern corner, removed about 7m thick habitation debris with solid brick walls, thereby virtually destroying a quarter of the mound.

At a little distance north of the market place are other remains. While digging in front of his house, a local farmer brought to light another medium sized cruciform Buddhist shrine of solid character which he systematically dug up to use its old bricks in his boundary wall. He also recovered some terracotta and stone plaques of the Paharpur type, beautifully carved with geometric and floral motifs, which he merrily used on the front wall of his dwelling for decoration. The mound is now heavily encroached by sundry shops, schools, union council office, a modern mosque, and an agricultural office.

GC Chandra of the Archaeological Survey of India visited the site in 1930-31 and observed that it measured about 64.5m east west and 40.5m north south with a height of about 10.5m from the surrounding ground. Brick robbers damaged it partially and exposed ancient structures and a miniature (1m high) bronze image of a four-armed Ganesh seated on a half-blown lotus in maharajalila pose, which he dated to 8th - 9th century. Subsequently, Kazi Meser visited it in 1963 to recover a mutilated stone image of Buddha and some terracotta plaques of the Paharpur type. Harunur Rashid of the Bangladesh Department of Archaeology inspected this site in 1974 and found that the whole area, especially the part of it around a large old tank to the southeast of Halud Vihara village was strewn with countless low mounds most of which had been leveled and brought under the plough. Old bricks and fragments of terracotta plaques were scattered all over the area. Foundations of massive building remains and the salvaged antiquities associated with these amply testify to the existence of a prosperous Buddhist establishment buried under the entire village of Halud Vihara. H Rashid also noticed in a house nearby some terracotta plaques and stone sculptures of the Paharpur type.

The site was protected in 1976 and excavated by the Department of Archaeology, Bangladesh, first in 1984 and then in 1993. The excavations revealed the remains of a temple complex consisting of a solid square structure with 5.80m sides which probably was the base of a stupa; two unequal oblong rooms; a staircase, and part of the enclosure wall of the complex.

Of the two rooms, measuring 5.55m' 3.20m and 2.6m' 1.6m, the smaller room is believed by excavators to have been the shrine where a large size stone icon had been installed facing the solid structure, while the larger one was intended to be a mandapa. Around this structure ran a 1.1m wide ambulatory passage.

Remains of two projections north and south of the temple complex were partly exposed, to which a brick paved pathway gained access from the south. Deep digging at a number of places to a maximum depth of 6.15m cut through eight occupation strata. A number of interesting antiquities and objects of daily use have salvaged from these sites. Also found here are earthen pots and pans. These include inscribed terracotta sealings, ornamental bricks, and a number of fragmentary terracotta plaques depicting human figures. Among the stone objects a pedestal of an icon, a cast of mould of ornaments, and grinding stone are notable.

The small scale excavation done so far at Halud Vihara unmistakably indicates the existence of a fairly prosperous Buddhist settlement of the early medieval period coeval with the ruins of Paharpur and Sitakot in varendra region. The identity of the ancient site is still to be ascertained but certainly preliminary findings offer encouraging prospects for further sustained operations. [Nazimuddin Ahmed]