Hare (khargosh) a long-legged herbivorous mammal of the family Leporidae (which also includes rabbits), order Lagomorpha. They move by jumping rather than by running. In contrast to rabbits (there are no rabbits in Bangladesh), hares are typically solitary, produce young that are fully furred and active at birth, and live in shallow surface depressions. 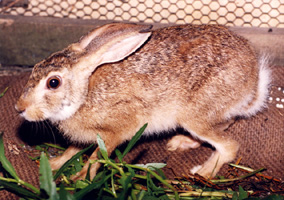 Rabbits live socially in burrows and give birth to undeveloped young. Worldwide there are about 44 species of rabbits and hares. Bangladesh has two species of hares. The hares are adapted for high-speed escape from predators - in full flight they can reach up to 80 km/h.

also known as Indian Hare, the Rufous-tailed Hare Lepus nigricollis is an endangered species in Bangladesh. Hind limbs of this hare are longer than the forelimbs; its eyes are large, ears long, and tail short.

The large ears aid the detection of predators, especially when the head is lowered while grazing, and also provide a large surface area for losing heat in warmer climates. Body colour is greyish yellow to rufous-brown, occasionally washed with black; limbs and breast are yellowish; remaining under-parts, face, neck and under-side of tail are whitish; there is a rufous patch on the dorsal side of the tail. Body length, including the head, is about 50 cm; tail is with hairs and is about 10 cm; ears are about 13 cm in length. Males are larger than the females.

The hare is usually nocturnal, it is a solitary animal, or may live in small groups. A common refuge in flight is a foxhole or similar burrows. Female hares deliver one or two young at a time, around October-November. The species is widely distributed in the country. Habitat loss and hunting are major threats. Common enemies are foxes, mongooses, wild cats and even domestic dogs. Hare is also found in Pakistan, India, Sri Lanka, Nepal and Bhutan. Another species, the Hispid Hare (also known as Assam Rabbit), Caprolagus hispidus occurs in the Garo Hills. It is a globally endangered species. Its present status in Bangladesh is not certain. [Md Anwarul Islam]