Hasan Raja (1854-1922) zamindar, mystic devotee and composer of songs. His full name is Dewan Hasan Raja Chowdhury. Hasan Raja was born on 24 January 1854 in a zamindar family of village Lakshmansree in Sunamganj subdivision of Sylhet district. His father Dewan Ali Reza Chowdhury was a zamindar of Lakshmansree and Rampasha. 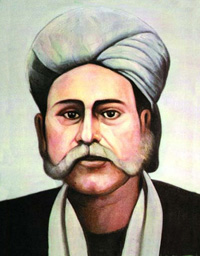 His mother was Hurmat Jahan Bibi. His forefathers came from Audh in Uttar Pradesh and first settled in Jessore and then in Sylhet. His grandfather Birendra Chandra Simha alias Babu Khan was a Kshatriya Hindu who accepted Islam with the faujdar of Sylhet. Hasan Raja’s father Dewan Ali Reza Chowdhury inherited vast landed property from his paternal and maternal forefathers, and established his zamindari estate in Sylhet. Hasan Raja succeeded his father to the zamindari estate at the age of fifteen. He did not take any formal education. Like most of his aristocratic contemporaries, Hasan also got education from family environment and tradition. Hasan successfully administered his zamindari estate for long fifty two years by dint of his intelligence and self-enlightenment.

He was not above sensuality and luxury, caprice and whim. At the same time, he was kind, generous and devoted to the service of the needy. At the mature age, Hasan Raja had a great change in his outlook to life. Under the influence of a sufi, he got inclined to spiritualism and began composing mystic songs. These songs are the outcome of his creative genius manifesting the reflection of his philosophical and spiritual thoughts. The lucid style of expression of the spiritual knowledge in easy language made them popular to common people. His mystic songs earned him immense social reputation during his lifetime and after. The lyrist Hasan Raja is now a household name in Bangladesh.'

An anthology of the songs of Hasan Raja titled Hasan Udas was published in 1914. A total of 206 songs is compiled in this book. The main theme of the songs is the concept of God, devotion to Him and the spiritual relation between the creator and the created beings. Besides, the frailty of human life, transience of worldly life, and his lamentation for non-capability in worship and meditation, his helplessness, self-dedication and submission to God have also been expressed in these songs. His concept of body-based metaphysics on the knowledge about God and the soul is the result of a synthesis of the concept of Sufism, traditional bhababad and mysticism of his own experience. His songs composed in regional dialect of Sylhet used to be transmitted verbally from one person to another. Now a days, the songs of Hasan Raja are practiced in educated society and are transmitted through all sorts of medias. Rabindranath Tagore, frequently cited Hasan Raja when he explained philosophy, religion and folk culture. Thus he projected Hasan Raja to the world community. Rabindranath quoted from his songs Momo akhi haite paida asman jamin and Rup dekhilam re nayane, apnar rup dekhilam re and commented: This Poet sings of the Eternal person within him coming out and appearing before his eyes just as the Vedic Rishi speaks of the person who in him, dwelling also in the heart of the Sun. All the emotion, attraction, worries and anxieties of Hasan Raja are expressed centering round this 'Eternal person'. He denoted this eternal person as Allah, Hari, Krishna etc and expressed his divine love and devotion, affection and pleasure. At one stage, he did not perceive any difference between his 'own self' (soul) and 'godhead' (divinity):

I do not understand who are you and who am I,

I do not see anything other than identical.

I have expressed my identity and abandoned my self.

You are the sole reality.

I have no existence save and except you;

I have realised that I am nothing beyond yourself.

Hasan Raja has been immersed in the depth of love,

Hasan Raja does not see anything beyond and except you. ...

I am you, you are myself, and I am frightened,

The concept of ‘Anal-Haq’ is reflected in all these songs.

In his speech, Rabindranath Tagore introduced Hasan Raja as 'a rural poet of East Bengal'. It is a fact that Hasan Raja composed his songs in the form and style of folk-songs, but his personal passion and emotion, experience and thoughts are so predominant in his theme of songs that these very deeply transcended other common folk-songs.

Hasan Raja is infatuated in love of his darling.

Hasan Raja is singing with clapping of hands,

His darling listens standing nearby.]

In these lines of the songs Hasan Raja saturated his name and abode in such a way that the theme of the song and the person concerned appear to be inseparable. Even though he used local dialect and folk tune in his songs, his style of singing is unique and exclusively of his own. He is a solitary poet to compose song in this inimitable tune. Zamindar Hasan Raja is an 'ascetic poet', not an ordinary 'folk-poet' or 'rural poet'. His songs should reasonably and exclusively be denominated as 'Hasan Rajar Gan'.

The second published book of Hasan Raja is a prose work titled Saukhin Bahar. The theme of the book is an analysis of the physical appearance, nature and characteristics of a bird like korha (a haor bird), animals like horse and elephant, and of the women-folk. Rearing of korha, horse and elephant was his hobby. He had in his house a bulk of beautiful damsels and maid servants. He wrote this book in the light of his personal experience. But in his description of the physical appearance, nature and characteristics of the theme especially of the women folk he failed to maintain decency, sophistication and taste. However, he will ever be remembered for his book Hasan Udas. He died in November 1922 at the age of sixty eight. [Tasiqul Islam]