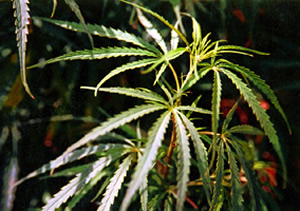 Hemp common name for an annual dioecius herb, Cannabis sativa, family Cannabinaceae. An intoxicating narcotic drug cannabis, widely used all over the world, is derived from the flowering female plants. The plant is indigenous to central and western Asia and is cultivated under government control in many countries of the world including India, tropical East and South Africa, and the United States of America.

However, large quantities of Cannabis are produced illegally in many countries of Asia and America including Bangladesh. The chief constituent of Cannabis is a resinous substance, known as cannabinone, which on distillation or burning yields a powerful narcotic substance, called cannabinol.

A considerable number of people of Bangladesh, both young and old, are addicted to cannabis smoking. Although prohibited by law, illegal production, trading, smuggling and use of the drug are increasing at an alarming rate in the country creating social and family problems. It has recently been reported that cannabis is clandestinely cultivated in some areas of Jamalpur and Sherpur districts. [Abdul Ghani]