Hizla Upazila (barisal district) area 515.36 sq km, located in between 22°50' and 23°05' north latitudes and in between 90°25' and 90°43' east longitudes. It is bounded by gosairhat and haimchar upazilas on the north, mehendiganj upazila on the south, raipur upazila on the east, muladi upazila on the west.

Administration Hizla Thana was established in 1911 and it was turned into an upazila in 1983. 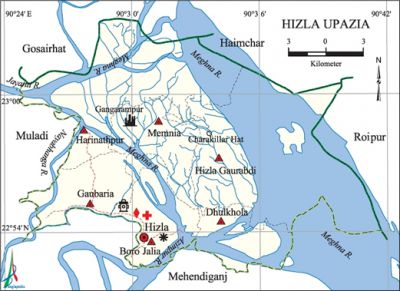 History of the War of Liberation During the war of liberation in 1971 the local freedom fighters of the upazila under base commanders Kutub Uddin and Kazi Anwar (Bir Pratik) conducted a concerted operation against the Pak army in the Hizla-Muladi region. Most of the operations were led by Kutub Uddin and Abdus Kuddus Molla. During the War of Liberation, a number of freedom fighters including Havildar Shah Alam, Nayek Azizur Rahman, Havildar Nur Muhammad and Sepahi Abdul Wazed were killed in encounters with the Pak army. Besides, the Pak army killed eight persons including Hossain Ali (teacher) of Palpara and Sultan Jamadar of Dadpur.

Natural disaster The cyclone of 1960 and the tidal bore of 1971 caused heavy damages to settlements, livestock and properties of the upazila. Besides, many people died of starvation during the famine of 1962.