Homeopathy a system of medicine that owes its origin to the German physician Samuel Hahneman, who in 1796 proposed the principle that served as the foundation of the system. The doctrine is based on the effect of drugs on healthy persons. It states that when a drug is administered in large doses to a healthy individual, the symptoms that it would produce would cure the same symptoms when administered in very small amounts. The scientific basis of this hypothesis has not been seriously investigated since it was first postulated.

In homeopathic system one sees that drugs are used in extremely diluted form, and their use over the years on very large number of subjects has established some cause-and-effect relationship between use and cure. This has encouraged its practice in various parts of the world. It was introduced in the USA in 1825 and although discouraged, there it is still practised. 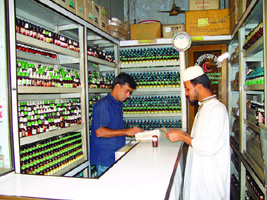 Usually drugs, prepared from plant material or as simple chemical substances, are obtained as concentrates, mainly from sources in the USA and the practitioner dispenses these after necessary dilution as specified in practitioner's guidebooks. Many guidebooks are available in Bangla that form the basis for the practice of homeopathic medicine in the country, although in recent years a few institutions for formal training have been established in major cities and towns.

The dispensing physician purchases the drug concentrate, which is usually very cheap and, when diluted for dispensation, often by thousand to million-folds, a very large number of clients can be served at little cost. The cost factor has significantly contributed to its widespread practice in Bangladesh and appears to have benefited clients and the practitioners alike. Most people in the country are too poor to afford the cost of visiting a medical doctor or buy even the most common medicines. For them the homeopathic practitioner is a suitable option who can often be found in the neighbourhood, even next door. Although an individual intending to practice homeopathy as a trade is expected to register with a Homeopathic Board, in practice many practitioners both in towns and in villages practice without bothering to register. This has no doubt encouraged its rapid spread. Although homeopathy has failed to gain the respect of physicians, its success often strikes headlines, albeit short-lived ones, in news media and even in high profile scientific journals as to the mechanism by which the system may possibly work.

The first formal institution was the Bangladesh Homeopathic Medical College and Hospital, a private institution, established in Dhaka in 1948. Later in 1989, the government established a similar institution with the name Government Homeopathic Degree College that offers the Bachelor of Homeopathic Medicine and Surgery (BHMS) degree. The college has at present, about 3000 students. Interest in this system of medicine, for historical and economic reasons, and because of its integration in our tradition, is high in Bangladesh and it is likely to remain so in the foreseeable future. [Zia Uddin Ahmed]