Hooka (hubble-bubble, sheesha) is the corrupt form of the Arabic word hukkah meaning a round casket. Hookah is a smoking device and the word hooka is now current in all South Asian and other languages, of the world. The English and other Europeans trading in India during Mughal period called it hubble-bubble; the French and the Dutch called it sheesha. While smoking, a hooka evokes a bubbling sound quite similar to the sound 'hubble-bubble' and 'sheesh'. 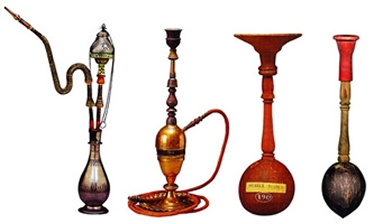 Hooka, which was hitherto used as an instrument for smoking cannabis and other allied narcotics, was now adapted to smoking tobacco. The content of smoking changed but not so much the means of smoking.

Hooka has many varieties. Anthropologically looked at, every caste and class had and largely still has its own variety of hooka which indicates the caste. Hooka in its simplest form and used by the humblest people is a coconut shell or an earthen pot with a short wooden or bamboo pipe fixed on it and a chilum on the top of the pipe. A chilum or kalki is a hollow cone-shaped container to hold the dressed tobacco and alight charcoal on it. By chilum the contemporaries meant both the content as well as the container. They would say 'have another chilum', as we say today 'have another cigarette or another glass'. The minimum dressing of tobacco is to cut the tobacco into fine pieces and mix it with molasses or chita gur. Smoking by ordinary hooka is conducted by inhaling through a hole made on the upper part of the shell or pot. As one inhales, the burned tobacco releases smoke from the chilum and goes down the chilum through the pipe and into the mouth of the smoker via the bubbled water in the shell or pot.

The hooka of the upper class people, which is known as Farsi (Persian) hooka, however, differs from other varieties in several ways. Its bottom part is normally metallic. Instead of smoking through a hole like the general hooka smokers, the elite hooka smokers do so through a pipe connected with the bottom part. The chilum of farsi hooka is more ornate. The upper class people use better quality tobacco in it and it is dressed with better quality chita gur (molasses) and also with some other agents for flavour. Hookas used by the royalties, zamindars, aristocrats and other affluent people were more decorative. The aristocratic hooka is now almost extinct. There were special artisans to manufacture hooka for the aristocrats. There were also special people to prepare chilum for the aristocrats. They were known as hookabardar. The hookabardars attended their masters for generation to generation and made a caste by themselves.

The hooka of the aristocrats was usually of silver make. It had many real and false pipes and tentacles. The smoking pipe was considerably long. The intention was to be able to smoke from a long distance without moving the hooka, which was normally stationed on a decorated silver plate. The long pipe was managed by coiling it around the hooka. The pipes and tentacles were luxuriously embellished with all sorts of colours and embroidery. The most luxurious was the chilum, which consisted of curious compound of tobacco, molasses, wine, aromatic herbs, fruits and spices. One inner aim of the royal chilum was to impress the durbar people with its aroma.

In its classical time, hooka was so much in vogue that people's rank and status was at risk if it was not served properly. It generated employment in the sense that every aristocrat maintained hookabardars. Punia, festivals, baizi nautch, private dinner parties remained incomplete without hooka. Every aristocrat took with him a number of servants to attend him in the party. One of them was a hookabardar. His job was to keep the chilum of his master ever alight. Imitating the native aristocratic habit, the European traders also smoked hooka. Once warren hastings, the governor general, notified that the invited guests at the dinner party in his house were advised to bring no more servants with them other than their respective hookabardars.

With the change of social structure, economy and technology, hooka as an institution has undergone radical change. Now cigar and cigarette have taken the place of hooka of the upper classes and bidi of the low income classes. However, in the rural society, hooka is still a dominant mode of smoking. [Sirajul Islam]